To share your memory on the wall of Josephine Rupp, sign in using one of the following options:

On June 25, 1951, Josie married Frank Rupp in Garden City. They moved to Deerfield, Kansas in 1964. Josie worked at the Deerfield Café and then for the Deerfield School District where she retired in 1991. Josie and Frank moved back to Garden City in 1992 where they have lived since. She was a member of St. Dominic Catholic Church in Garden City and enjoyed word search puzzles, crossword puzzles, and cooking.

A vigil service and rosary will be held at 7:00 p.m. on Sunday, April 28, 2019 at Garnand Funeral Home in Garden City. Funeral Mass will be held at 10:30 a.m. on Monday, April 29, 2019 at St. Dominic Catholic Church in Garden City with Rev. Warren Stecklein as Celebrant. Burial will follow at Sunset Memorial Gardens in Garden City. Friends may call from Noon to 8:00 p.m. on Saturday and from Noon to 8:00 p.m. on Sunday all at Garnand Funeral Home. The family suggests memorials given to the Alzheimer’s Association in care of the funeral home.
Read Less

Receive notifications about information and event scheduling for Josephine

We encourage you to share your most beloved memories of Josephine here, so that the family and other loved ones can always see it. You can upload cherished photographs, or share your favorite stories, and can even comment on those shared by others. 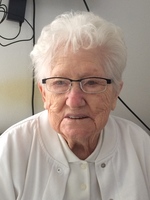