To share your memory on the wall of Leland Meyers, sign in using one of the following options:

He was a charter member of the Southern Baptist Church of Deerfield. Later he became a member of Victory Baptist Church in Lakin and was a faithful follower of the Lord. He supported many missionary groups around the world, Jerusalem missions, Televangelists and gave faithfully to those he was drawn to. Leland bought bibles and sent them overseas. He and his Mother paid for a well to be dug in Africa. He enjoyed listening to Christian music, one of his favorite concerts was in Oklahoma City where he saw B.J. Thomas. He loved reading the bible, swimming and roller skating which is where he broke his leg once at a church party in Lakin. Leland, his Mother and Sister had the opportunity to go to Washington, D.C. and participate in the March Of Life. He taught Dale as well as several nephews and nieces how to drive his car. He was very helpful to his Sister Martha in raising her grandchildren and helping with their homework. Leland never forgot his niece’s and nephew’s birthdays, he sent each of them a card and enclosed $ 1.00.

He is survived by 5 Brothers- Grant Meyers, Jr. of Lakin, Glenn (Martha) Meyers of Deerfield, David (Janice) Meyers of Deerfield, Donald Meyers of The Philippines & Dale (Donna) Meyers of Wisconsin, 2 Sisters- Ida (A.B.) Bolton of Ulysses & Martha Langley of Deerfield and numerous nieces and nephews. He is preceded in death by his Parents, 5 Sisters-
Dara, Anette, Linda, Mary & Shirley and Brother-In-Law- Ivan Langley.

Funeral service will be at 1:00 PM Saturday, May 11 at Garnand Funeral Home in Garden City with Rev. Kenton Connor officiating. Burial will be at Pyramid View Cemetery in Gove County. The family invites friends and relatives to
Scott Lake Park after the graveside for a potluck luncheon. Please bring your place setting, meat, dish to pass and drinks. Memorials are suggested to Victory Baptist Church in care of Garnand Funeral Home. Condolences may be posted at www.garnandfuneralhomes.com

Receive notifications about information and event scheduling for Leland

We encourage you to share your most beloved memories of Leland here, so that the family and other loved ones can always see it. You can upload cherished photographs, or share your favorite stories, and can even comment on those shared by others. 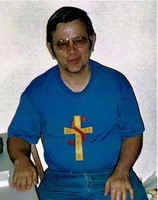