To share your memory on the wall of Max Miller, sign in using one of the following options:

Max grew up in the family farm North of Deerfield, Kansas. He attended Deerfield Schools and graduated from Deerfield High School in 1944. On December 26, 1947, he married Marianne Reed in Garden City. They lived on the family farm until 1985 when they moved to Garden City. They have lived in Garden City since. A lifetime farmer and stockman, Max was a member of the First United Methodist Church in Garden City; a member of Master Farmers; and he served on numerous boards and committees in Southwest Kansas. Max was a car enthusiast and he enjoyed collecting cars, traveling, and playing Rook with friends.

A celebration of life service will be held at 10:30 a.m. on Thursday, May 9, 2019 at the First United Methodist Church in Garden City with Rev. Joel Plisek officiating. A private family committal service will take place at a later date. There will be no calling hours. The family is suggesting no flowers, but memorials may be given to the Max Miller Memorial Fund to which the family will donate to various organizations in the community. Memorials are in care of Garnand Funeral Home of Garden City, Kansas.
Read Less

Receive notifications about information and event scheduling for Max

We encourage you to share your most beloved memories of Max here, so that the family and other loved ones can always see it. You can upload cherished photographs, or share your favorite stories, and can even comment on those shared by others.

Posted May 06, 2019 at 10:21pm
My sincere condolences to the family of Max Ralph Miller. May you be comforted by your thoughts and memories of your loved one and God’s promise to “wipe out every tear from people’s eyes” and “make death go away forever” (Revelation 21:4). With deepest sympathy. 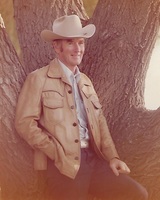