To share your memory on the wall of Ronald Evans, sign in using one of the following options:

Ron will be deeply missed by his colleagues, his lifelong friends, and, above all, his children. Ron loved his daughter Bailey Evans of Brooklyn, New York, and his son Ryland Evans of Portland, Oregon without measure or reservation. He gave them a steady and humorous world view. He also loved his faithful dogs, especially Gus.

Ron was a polymath who read and absorbed everything. He was Google long before there was a Google—he knew movies, sports, books, law, politics, and music, his true passion. Ron was also a public defender for over 30 years, and the national authority on the McDougall v. MacDoogal legal doctrine. He defended thousands of people who were in trouble but too poor to hire a lawyer, and whose lives often weighed in the balance. He mentored and influenced many young lawyers who still strive to emulate his skills. Ron was the long-time chief of the Kansas Death Penalty Defense Unit in Topeka, Kansas, and, since 2015, the chief attorney for the Western Regional Public Defender in Garden City, Kansas.

Ron was born in Okemah, Oklahoma on November 9, 1957, to Frank Elijah Evans and Jewell Dean Evans. He grew up in Stillwater, Oklahoma and graduated from Oklahoma State University. He earned his law degree from the University of Oklahoma in 1982, and began practicing law at the Oklahoma County Public Defender in Oklahoma City, Oklahoma. He moved to Austin, Texas in 1997 and then Topeka, Kansas in 1999.
Ron was preceded in death by his father Frank Evans. In addition to his children, Ron is survived by their mother (and his former wife), Melody Brannon, by his mother, Jewell Evans of Stillwater, Oklahoma, and by his brother Rick Evans and family of Tulsa, Oklahoma.

Private visitation for the family was May 6, 2019, in Garden City, Kansas, at Garnand Funeral Home. Friends and colleagues in the Garden City area are welcome to gather to remember Ron this Thursday, May 16 at 6:00 p.m. at Samy’s Spirits and Steakhouse. Memorial donations may be made to the Music Health Alliance and MusiCares, both of which help musicians and songwriters in need of financial help or medical care: http://www.musichealthalliance.com/donate-to-heal/ and https://www.grammy.com/musicares/donations.
Read Less

Receive notifications about information and event scheduling for Ronald

We encourage you to share your most beloved memories of Ronald here, so that the family and other loved ones can always see it. You can upload cherished photographs, or share your favorite stories, and can even comment on those shared by others. 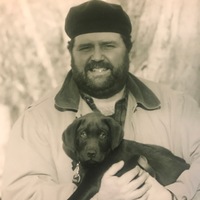