To share your memory on the wall of Ronald Stull, sign in using one of the following options:

Provide comfort for the family of Ronald Stull with a meaningful gesture of sympathy.

Sonny was a longtime Dighton resident and worked many years as the Partsman at Bretz, Inc in Dighton. After retiring in 2001 he worked part time for area farmers. He was a member of the First Christian Church where he played Simon in the Easter Living Picture for many years and also was a local leader of Alcoholic Anonymous. He was very proud of being sober for over 40 years. He enjoyed always having a miniature collie as his pet. He was preceded in death by his Parents, Son- Gary Stull and infant Sister- Charlene Stull.

He is survived by his Son- Kent Stull of Tulsa, Oklahoma, Daughter- Rhonda Brewer of Garden City, Sister- Barbara Speer of Somis, California and several Grandchildren.

Receive notifications about information and event scheduling for Ronald

We encourage you to share your most beloved memories of Ronald here, so that the family and other loved ones can always see it. You can upload cherished photographs, or share your favorite stories, and can even comment on those shared by others. 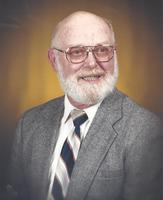