To share your memory on the wall of Roberta Brewer, sign in using one of the following options:

Provide comfort for the family of Roberta Brewer with a meaningful gesture of sympathy.

Roberta was born on May 30, 1919 at home on a small farm in Wamego, KS. Her mother, Catherine Anastatia Brannick LaFontaine was a widow with 5 children when she met and married Josiah Brown in 1915. Roberta was the second of three children born to this union. She graduated from Wamego High School in 1937 and one of her favorite memories from her high school days was playing basketball. She was particularly proud of the fact that her team played 34 games with no defeats. She also learned to play the piano and violin and loved music all her life.

Roberta attended Emporia State Teachers College where she obtained her teaching certificate. At age 19 she accepted her first teaching position in Ulysses where she taught 7th grade in addition to teaching music and coaching the girl’s basketball team to a tournament victory in Sublette. Across the hall from her classroom was another young teacher, also 19 years old, who taught 6th grade. His name was Marshall Brewer and it wasn’t long before they noticed each other. The students apparently noticed too, because they would write “Mr. Brewer loves Miss Brown” on her blackboard.

When Mr. Brewer broached the topic of marriage, he added that he’d like to become a doctor and asked if she believed in long engagements. She said yes, that she would wait for him and took teaching positions in Augusta and Kansas City to be close to where he was studying at the University of Kansas Medical School. They were finally married at the Presbyterian Church in Wamego on June 22, 1945 between his junior and senior year. Marshall taught Roberta how to perform some of the lab tests they would need to conduct in their clinic, and taught her to give shots on himself. Upon his graduation they rode the train back to Ulysses to open his medical clinic. The young couple had no car and no money, but a country doctor needs transportation so local car dealer Howard Phifer gave them one on credit! Oh, how times have changed!

Roberta and Marshall worked together for the next 40 years or so, with him seeing patients and performing surgery and her running the business office. She also accompanied him on numerous house calls and home baby deliveries, as Ulysses didn’t have a hospital until 1951. She loved to tell the story of delivering a baby by herself when Marshall was at the Garden City hospital delivering a baby at the same time. She recalls that a very pregnant woman came to the door ready to give birth so Roberta invited her inside and delivered the baby - on HIS side of the bed! In later years when Roberta was fighting breast cancer that same baby, who had grown up to become a nurse, administered her weekly chemotherapy. Janice Koehn, you will always be Roberta’s special baby!

In 1957 they adopted their own baby, 6 week old Marsha Ann, and Roberta divided her time between managing the clinic, various organizations and clubs, and being a busy working mother to a very, as she called her, “spirited” daughter. Roberta was a member of the Priscilla Bridge Club, Eastern Star, Junior Civic Club, and a past president of the Southwest Kansas Medical Auxiliary among others, and has been a member of the United Methodist Church in Ulysses for many years.

Roberta didn’t have much spare time for hobbies but she loved watching sports, in particular Kansas State football and Kansas Jayhawks basketball. She also loved horse racing and the Brewers bred and raised thoroughbred horses which they raced in Kansas, Colorado and New Mexico. The Brewers loved traveling and took many trips over the years everywhere from Florida to Alaska and Hawaii, and Jamaica to Japan and Southeast Asia. One of their favorite spots was San Isabel, Colorado where they co-owned a cabin with some of their best friends: Bud and Ruby Williams, Ned and Barbara Russell, and Cecil and Lyn Kepley. Many happy memories were made there. Whether it was a medical convention, Mardi Gras, the Kentucky Derby, or a fishing or deer hunting trip, Roberta went everywhere Marshall went. They were inseparable until his death in December of 2000.

Broken-hearted after his demise, she endured 19 long years of loneliness and has finally rejoined her beloved Marshall in God’s glorious kingdom, reuniting with the many friends and loved ones who preceded her in death. She is survived by her daughter Marsha and son-in-law Loren Jay Gough, as well as numerous nieces and nephews and their children whom she dearly loved.

In lieu of flowers, the family suggests a contribution in Roberta’s name to the Grant County Senior Center, Bob Wilson Memorial Hospital, the First United Methodist Church, or a charity of your choice, in care of Garnand Funeral Home, 405 W. Grant Ave., Ulysses, KS 67880.
Read Less

Receive notifications about information and event scheduling for Roberta

We encourage you to share your most beloved memories of Roberta here, so that the family and other loved ones can always see it. You can upload cherished photographs, or share your favorite stories, and can even comment on those shared by others.

Posted Jul 09, 2019 at 06:40pm
Please accept our heartfelt condolences for the loss of your beautiful mom. She was an incredible lady loved by many, including me! Hugs & love to you & family.
Comment Share
Share via:

Posted Jul 09, 2019 at 11:57am
Roberta and Doc were such a wonderful asset for our community. They were awesome kind, caring, special people.
May Roberta rest in peace with Doc and their friends.
Betty Burns
Comment Share
Share via:
CF

Posted Jul 09, 2019 at 09:41am
Your mother was a remarkable person and what a beautiful story about your mom & dad, Marsha! I am so sorry for your loss, but hope you find comfort knowing they are in each other's arms once again. Your parents were both the type of people that I cannot imagine anyone ever having an unkind word to say about them. May you feel God's presence, giving you peace.
Comment Share
Share via: 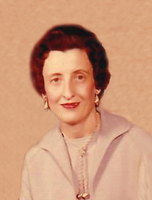