To share your memory on the wall of David Belling, sign in using one of the following options:

Provide comfort for the family of David Belling with a meaningful gesture of sympathy.

David attended grade school and junior high in Leawood, Kansas before moving to Albuquerque, New Mexico and graduating from El Dorado High School in 1973. He went to New Mexico University and received his Bachelor’s in Journalism and then graduated from the University of Kansas Law School in 1980. He became the Miami County Attorney in Paola for two years and then worked at Kansas Legal Services in Hays for 22 years. In 2004 he moved to Garden City to work as a Public Defender and in 2006 moved to Dodge City where he was the Deputy Ford County Attorney. In 2018 he moved to Holcomb. David enjoyed KU Basketball, New Mexico Football and Basketball. He had a goal of attending a major league baseball game in every big league stadium. He was an avid reader and studier of war history.

A Memorial Service will be held at a later date. Burial will be at Kansas Veterans Cemetery in Fort Dodge. The family suggests memorials may be made in David’s name to your favorite charity. Condolences may be posted at www.garnandfuneralhomes.com.

Receive notifications about information and event scheduling for David 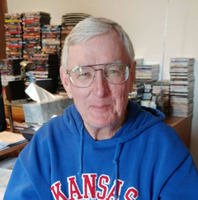