To share your memory on the wall of Valentine Perez, sign in using one of the following options:

Provide comfort for the family of Valentine Perez with a meaningful gesture of sympathy.

Valentine graduated from Lakin High School, working in the high school’s maintenance dept. while in school and continued there for 17 years after graduation. He then became an Oiler at KN Energy for the rest of his working career. He was a member of St Anthony Catholic Church of Lakin, Knights of Columbus, and had been a volunteer fireman with the Lakin Fire Department for many years. He enjoyed traveling the country, especially visiting the Rocky Mountains in CO. He enjoyed attending his family’s sporting events and was an excellent self-taught handyman and mechanic, often repairing vehicles for the Lakin community. He especially loved saying the Rosary and attended mass wherever he happened to be on any given Sunday.

He was preceded in death by his parents, Juan and Jessie, brother Tony Perez and sister Terri Perez.

Vigil Service will be at 7:00 PM Monday, July 15 and Funeral Mass at 10:00 AM Tuesday, July 16 at St Anthony Catholic Church in Lakin with Rev Peter Tran as Celebrant. Burial will be in Lakin Cemetery. Friends may call from 9:00 AM to 5:00 PM Monday at Garnand Funeral Home in Lakin. Memorials are suggested to St Anthony Catholic Church in care of Garnand Funeral Home. Condolences may be posted at www.garnandfuneralhomes.com

We encourage you to share your most beloved memories of Valentine here, so that the family and other loved ones can always see it. You can upload cherished photographs, or share your favorite stories, and can even comment on those shared by others.

Posted Jul 18, 2019 at 09:28pm
Sorry to hear of Valentine Perez death. He will be missed greatly in our community. Our thoughts and prayers are with each of you. Harold & Maylene Williams
Comment Share
Share via:
FN

Posted Jul 17, 2019 at 02:39am
I have a feeling even the Lord our God was surprised at what a wonderful human being he'd created!! I always looked up to him and at KN Energy when we worked together with the rest of the crew! He was a source of inspiration for me, and I'd like to think he also inspired me to come to the faith. I can't say enough good things about Val and his family!!! I know it will be very rough without him - but we must remember that Jesus heals, and he is in that place of comfort that the Bible describes. How fortunate I was to know him and his family. Please do not despair at his passing - he transports the will of God to help us make it through this life. God bless Val Perez and his entire family and group of friends!!!
Comment Share
Share via:
LH

I was so sorry to hear of Val's passing. He was the active neighborhood dad to a lot of kids who had the pleasure of his presence at the Perez basketball court or just hanging out in the back yard or most of our local and out of town games no matter the sport. He always had time for everyone and loved to joke and make all of us laugh. While I didn't get or take the opportunity to tell him how much he meant to all of us, I hope you all will know that he was greatly appreciated. I know he was always very proud of all of you too! So sorry we could not attend the services but please know we are there in spirit.

My heart is sad yet rejoicing because Uncle Val has met our Lord and is enjoying Grandpa and Gran's Perez Village in heaven! I am so thankful that I was able to spend time with him and Aunt Mary when I was out in Kansas. Uncle Val, you are an outstanding example of faith, hope, and love. I am so sorry that I will not be able to attend the services. You all are in my thoughts and prayers. Hugs to all - With much love and respect - Gabralene'
Comment Share
Share via:
JR

Posted Jul 14, 2019 at 10:11pm
In October of last year I had the opportunity and the honor of meeting both Val and Mary, and the pleasure of working closely with them for a 9 month period. I don't have one single memory of Val to share. What I do have are multiple memories... not to ever be forgotten of spending a great deal of time with one of the kindest and more gentler souls that I am sure is one of very few that I will meet in my lifetime. A rare soul in general. Always gracious. Kind. Accepting. Respectful. Always smiling. Every morning Val would look outside and say, "It's going to be a Beautiful Day!" I must admit a day with him and Mary always was. For me. Val always wished for Angels to surround him. To be near him. As his Sister Ruby always wished for him. I know in my heart that he was indeed surrounded by Angels on Earth. Just as I know he is surrounded by Angels now. I wish peace for his sweet soul in rest. And peace and Angels and strength for Mary and the entire Family. Many blessings. He is sadly missed. But never forgotten.
J. Robinson
Comment Share
Share via: 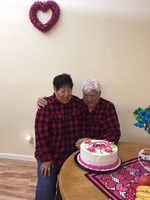