To share your memory on the wall of Alice Reimer, sign in using one of the following options:

Provide comfort for the family of Alice Reimer with a meaningful gesture of sympathy.

Alice grew up in the Liberal area where... Read More
Alice May Reimer, 80, died Wednesday, August 7, 2019 at St. Francis Hospital in Wichita, Kansas. She was born March 4, 1939 in Liberal, Kansas the daughter of Howard & Earlene (Ellis) Massie.

Alice grew up in the Liberal area where she graduated from Liberal High School in 1957. On May 10, 1958, she married George R. Reimer in Liberal, Kansas. They lived in various places before moving to Satanta, Kansas in 1975. Alice later moved to Lakin, Kansas in 2007 where she has lived since. A homemaker, Alice was a member of the Wesleyan Church of Lakin, the Kearny County Historical Society, and the Kearny County Senior Center where she was very active in their activities. Alice also enjoyed volunteering her time at the Budget Shop and playing Bingo.

Funeral services will be held at 11:00 a.m. on Monday, August 12, 2019 at the Wesleyan Church in Lakin, Kansas with Pastor Chris McFadden officiating. A graveside service will be held at 2:00 p.m. also on Monday at the Ulysses Cemetery in Ulysses, Kansas. Friends may call from 5:00 p.m. to 8:00 p.m. on Saturday and from 1:00 p.m. to 8:00 p.m. on Sunday all at Garnand Funeral Home in Lakin. The family suggests memorials given to the Budget Shop in care of Garnand Funeral Home.
Read Less

We encourage you to share your most beloved memories of Alice here, so that the family and other loved ones can always see it. You can upload cherished photographs, or share your favorite stories, and can even comment on those shared by others. 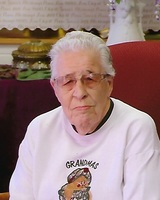