To share your memory on the wall of Ruth Butler Dyson, sign in using one of the following options:

A Great Bend resident since 2015, Ruth previously lived in Lakin, Topeka and Wichita. She was a long time dedicated telephone operator for Southwestern Bell. She enjoyed square dancing and traveling the world.

Receive notifications about information and event scheduling for Ruth

We encourage you to share your most beloved memories of Ruth here, so that the family and other loved ones can always see it. You can upload cherished photographs, or share your favorite stories, and can even comment on those shared by others. 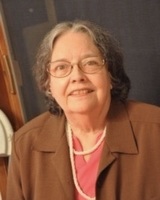