To share your memory on the wall of Gloria Garcia, sign in using one of the following options:


Gloria grew up and attended school in Lamar. She met Epifanio “Pete” Garcia at a dance in Syracuse. They married on October 3, 1946 in Garden City. He died on January 24, 2007. They started a family, and while he worked and played in various bands, she cared for the family. She loved to cook and felt the need to put a little meat on anyone’s bones. Her homemade tortillas were a neighborhood favorite. She enjoyed crocheting, sewing, and embroidery. She didn’t mince words and was always very direct. Her giggle was one of a kind. She was a talented artist, drawing even in her later years. She was a devout Catholic and was a member of St. Mary Catholic Church. In addition to her husband she was preceded in death by her siblings, Alejandro Alonzo, Dario Alonzo, Frank Alonzo, Magdalena Gomez, Pauline Oviedo, Phyllis Jacobs, Lola Alvillar & Bessie Agredano.

She is survived by her children

Condolences may be posted at www.garnandfuneralhomes.com
Read Less

Receive notifications about information and event scheduling for Gloria

We encourage you to share your most beloved memories of Gloria here, so that the family and other loved ones can always see it. You can upload cherished photographs, or share your favorite stories, and can even comment on those shared by others.

Posted Sep 08, 2019 at 11:27am
Eppy, I am sad to hear of the passing of your mother. I pray that God will bless you and your family with peace that transcends all understanding. Love, from JD & Carol.
Comment Share
Share via:

Posted Sep 06, 2019 at 07:46pm
Your Cousins in California have you in our prayers. The last of the generation and it is hard to say goodbye. We know our Grandma Lola is there in heaven to welcome her. We will say Mass for Aunt Gloria here at St Catherine Laboure in California and I have asked that they remember her again at St. Mary. My Dad Butch would say "Family is always connected by blood no matter how far you go you will always be a part of us." We love you all and may perpetual light shine upon you. Jeanne, Marc, Andy & Loretta Alvillar
Comment Share
Share via:
LT

Posted Sep 05, 2019 at 03:40pm
Eppy, Elaine and family, My condolences on the death of your mother, she was a sweet lady and raised a terrific son.
Avis Wallace
Comment Share
Share via: 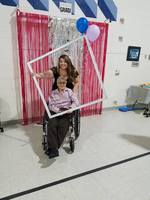