To share your memory on the wall of Deborah Scott, sign in using one of the following options:

She grew up in Dodge City and attended Dodge City schools. She stayed in Dodge ... Read More
Garden City- Deborah Michelle Scott, 44, died on Monday September 2, 2019 at her home in Garden City. She was born on December 10, 1974 at Pryor, Oklahoma.

She grew up in Dodge City and attended Dodge City schools. She stayed in Dodge City until moving to Ashland in 2002. In the past several years she has lived in both Ashland and Garden City. Deborah’s special love was her Grandchildren and enjoyed fishing, BBQ and just generally having fun, especially making prank phone calls. She was preceded in death by her Father and Brother- Allen Resor.

There will be no services held at this time. Memorials are suggested to the Deborah Michelle Scott Memorial Fund in care of Garnand Funeral Home. Condolences may be posted at www.grnandfuneralhomes.com

Receive notifications about information and event scheduling for Deborah

We encourage you to share your most beloved memories of Deborah here, so that the family and other loved ones can always see it. You can upload cherished photographs, or share your favorite stories, and can even comment on those shared by others. 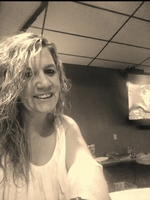