To share your memory on the wall of Jean Warden, sign in using one of the following options:

Jean graduated from Chivington High School and moved to California where she worked in a fruit factory. She moved back to Chivington and worked in a General Store. After her marriage they moved to Eads, Colorado where she delivered meals. In 1953 they moved to Lakin and she worked at several different places including Anschutz Grocery, Glen’s Grocery Store, Style Shop, Rags & Ruffles, Lakin Theater before she started as an Office Clerk at the Kearny County ASCS office and spent over 30 years there and retired as the County Executive Director. She was a member of the United Methodist Church and Order Of Eastern Star both of Lakin. She enjoyed quilting, shopping, raising flowers and especially her family and neighborhood activities and events. She was preceded in death by her Parents, Husband, 4 Sisters, 1 Brother, 2 Grandchildren and 1 Great-Great-Grandson.

She is survived by her 3 Sons- Trenton Warden of Deerfield, Neil Warden of Grove, Oklahoma, Leigh Warden of Grand Junction, Colorado, Daughter- Pamela McBride of Garden City, 8 Grandchildren and 11 Great-Great-Grandchildren.

Funeral Service will be at 10:30 AM Monday at United Methodist Church in Lakin with Rev Ivan Milosi and Pastor Wes Oakley officiating. Burial will be in Lakin Cemetery. Friends may call from 2:00 PM to 8:00 PM Sunday at Garnand Funeral Home in Lakin. Memorials are suggested to United Methodist Church in care of Garnand Funeral Home. Condolences may be posted at www.garnandfuneralhomes.com

Receive notifications about information and event scheduling for Jean

We encourage you to share your most beloved memories of Jean here, so that the family and other loved ones can always see it. You can upload cherished photographs, or share your favorite stories, and can even comment on those shared by others.

Posted Sep 09, 2019 at 09:42am
So sorry at your loss of your Mother. I know she's already up there sewing a quilt for Jesus! I will never make a balarney stone that I don't think of her! Especially the time she helped me!!
Prayers for all of you

Posted Sep 08, 2019 at 08:24pm
My beloved Aunt Jean, I have so many wonderful memories of you. I remember you telling my Mom: "Belle, swing that arm" (before we knew Mama had Parkinson's). I remember your laugh, your sassiness, the look you got when you were mad (look out everyone), and the unconditional love you had for your family. I remember you comforting Paul Jay when the doves he shot couldn't be cooked. I remember you teaching 3 year old Dustin the song, Zachias (was a wee little man). You had the greatest sense of style! I have a vivid memory of you in a denim skirt and blouse (blouse had lots of bling), a big sparkly belt, silver earrings and oodles of bracelets. You looked smashing!!!! Roxanne said to be sure and mention your wonderful style and bling. But none of the bling or sparkles you wore could ever compete with your inner sparkle!!! You are so loved and always will be. Don't cause too much mischief on that heavenly plain (but a little is ok )
Comment Share
Share via:
WR

Posted Sep 07, 2019 at 12:50pm
I sat and cried when I heard Aunt Jean had died. It was not unexpected, but an anticipated loss is not the same as the actual loss. And this was a loss for all who knew and loved her. I cried for her, for me and for our entire family. She was the last of my mother's four sisters. The last of that generation. She was our link to our grandparents, our family historian, devout Christian, great story-teller, avid Michael Strahan fan, gifted quilter, encourager, talented cook, snazzy dresser, empathetic listener, and caring person, truly beloved by all. Every time I see a little "Bling" I will think of Aunt Jean. My heart goes out to Pam, Trent, Neil and Leigh, and to all of her grandchildren and great grandchildren, your loss is immense. With love, hugs and prayers, Mary
Comment Share
Share via:
DW

Posted Sep 06, 2019 at 03:46pm
Dear Pam and family, so sorry to see your Mother’s passing. I have always loved you and will continue to. I see from her picture where you get your beauty. My thoughts and prayers are with all of you. Dolly Wasinger
Comment Share
Share via: 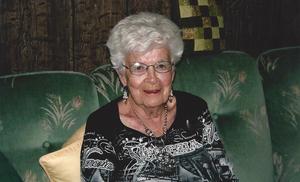