To share your memory on the wall of Harold Williams, sign in using one of the following options:

Harold went to the Columbia one-room country grade school through the sixth grade. His parents moved to town in August, 1943, where he started the seventh grade in the Lakin Grade School. He graduated from Lakin High School in May, 1949. He worked for the State Highway Department prior to his induction into the United States Army on October 15, 1951, and was honorably discharged on October 16, 1953, with the rank of Corporal. He took his boot training at Ft. Knox, Ky. and was assigned to Sonthoffen in South Germany. He served in Wiesbaden, Germany in the Battery B, 40th AAA Gun Battalion. Harold's dad died suddenly of a heart attack on March 30, 1953. He later returned home on a moral leave in May 1953. Harold received "Outstanding Trainee of the Day", Occupation Medal in Germany, the National Defense Service Medal, Sharpshooter Badge, and the Good Conduct Medal.

Harold returning home, continued to work for the State Highway Department until February 20th, 1956, when he went to work for the Kansas Highway Patrol. He worked as Patrolman at Liberal, Kansas, and on the Turnpike between Wichita and Topeka until November 1, 1959. He met Maylene Chance on a blind date on April 5, 1959, in Topeka at the Policeman's Ball with the Harry James Orchestra playing. This special date changed his life. They became engaged January 1, 1960, and were married May 15, 1960, at the Elmont Methodist Church where Maylene was active in the church. Harold was 28 years old and Maylene was 20 years old. They bought and moved into their first home at 402 South Lakin, Street, Lakin, Kansas. They have been blessed with fifty-nine years of marriage.

In November, 1959, Harold had left Topeka and was working for Lakin-Kendall Farmers Coop. He continued working there until April 1, 1963, when he was hired at Colorado Interstate Gas Co. at Lakin. Harold retired from CIG April 1, 1994, with 31 years. He also worked extra for the ASCS Office measuring crop and bins for 30 years. He was a volunteer fireman for the Kearny County Fire Department for 15 years, and his biggest passion was working for Edd Murray on his farm harvesting wheat, working on machinery, and just hanging out with Edd and enjoying Ivah's cooking and baking.

Harold was an active member of the Emerald Lodge No. 289, A.F. & A., Lakin, Kansas for 60 years and served as Worshipful Master during the year of 1963. Harold was baptized and united with the Lakin Methodist Church on March 26, 1961. He attended Sunday School, Church, Bible Studies, and held many offices in the church including Church Treasurer for 4 years, and was president of Lakin United Methodist Men for several years. He loved the Lord and his church family. He loved spending time with his children Vic, Valerie, Ann, and Chance and our exchange student from Argentina, Juan Torres, when Chance was a senior. His best retirement gift was our first grandchild, Ben Williams and from him there were 16 more grandchildren to bless our lives.

Harold was very talented with woodworking. He doubled the size of our first home, built a garage and a little barn tool shed. He designed and made baby cradles and time-out chairs for all the grandchildren, friends, and nieces and nephews who wanted one. He built several little barns and doll houses for our children and the grandchildren. He created wagons and rebuilt used bicycles and tricycles. He built cabinets for our church, Prayer Stand with a kneeling bench, China cabinets, a gun case for our nephew, and many others items. He was blessed with many talents and had a joy in sharing with others.

A celebration of life service will be held at 1 pm on Saturday, September 14, 2019, at the First United Methodist Church in Lakin, Ks. with Rev. Ivan Milosi officiating. Burial will follow at the Lakin Cemetery. There will be no calling hours.

The family is suggesting no flowers, but those wishing to honor Harold may do so by contributing to the Lakin United Methodist Church, Kearny County Historical Society, the Kearny County Senior Center, or memorial of your choice.

Condolences may be given at garnandfuneral-homes.com.
Read Less

Receive notifications about information and event scheduling for Harold

We encourage you to share your most beloved memories of Harold here, so that the family and other loved ones can always see it. You can upload cherished photographs, or share your favorite stories, and can even comment on those shared by others.

Posted Sep 23, 2019 at 03:02pm
My sincere sympathy to Maylene and family. I feel so grateful to have made Harold's acquaintance. I always looked forward to visiting with him (and Maylene). He always had something interesting to talk about. I will cherish the time I spent with him.
Sincerely,
Nadene Gaynor
Comment Share
Share via: 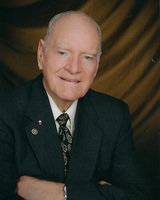