To share your memory on the wall of Ruben DeLeon, sign in using one of the following options:

Ruben grew up in Meadow Texas where he attended school. He had worked in the sugar beets in 1954, in construction, and at Farmland from 1964-1986. In 1963, Ruben married Estella Montemayor in Garden City. She died on January 27, 2016. He enjoyed riding around in his old pick-up truck, listening to music, and visiting with farmers. He could strike up a conversation with anyone. His persuasive nature granted him many favors. His grandchildren are left with his wonderful stories and the love he shared abundantly.


Condolences may be posted at www.garnandfuneralhomes.com

Receive notifications about information and event scheduling for Ruben

We encourage you to share your most beloved memories of Ruben here, so that the family and other loved ones can always see it. You can upload cherished photographs, or share your favorite stories, and can even comment on those shared by others.

Posted Sep 09, 2019 at 02:05pm
Im so sorry for the loss of your beloved ruben he was a really nice man.and a joy to his family...prayers in jesus name
Comment Share
Share via: 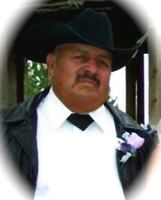