To share your memory on the wall of Edgar Eves, sign in using one of the following options:

Provide comfort for the family of Edgar Eves with a meaningful gesture of sympathy.

Edgar grew up in Lakin where he attended schools and graduated from Lakin High School in 1955. He later moved to Sublette, Kansas in 1966 and has lived there since. In January 1956, he married Sondra Craig in Clayton, New Mexico. Edgar was the owner and operator of Midwest Casing. He was a member of the Kearny County Historical Society, the Emerald Lodge #289, and he was a past board member of API. Edgar enjoyed spending time with his grandchildren, and traveling the world with his friend Shirley Trimpa where he would often include his children and grandchildren on his trips.

A Graveside Service will be held Saturday October 12, 2019 at 4:30 P.M. at Lakin Cemetery, Lakin, Kansas. There will be a celebration of life dinner to follow. There will be no calling hours. The family suggests memorials given to the Anna Leigh Riphahn Memorial Scholarship in care of Garnand Funeral Home of Garden City. Ed had established this fund in memory of his granddaughter.
Read Less

We encourage you to share your most beloved memories of Edgar here, so that the family and other loved ones can always see it. You can upload cherished photographs, or share your favorite stories, and can even comment on those shared by others. 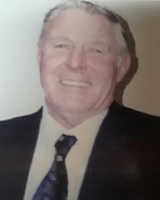