To share your memory on the wall of Andrew Allen, sign in using one of the following options:

Provide comfort for the family of Andrew Allen with a meaningful gesture of sympathy.

Andrew moved with his family to Garden City when he was a child. He attended Garden City schools. Andrew was a member of the Eagle’s Lodge in Garden City and he enjoyed collecting antiques, windmills, demolition derby’s, and working on cars. Andrew began his working career in the oil fields. He later worked in power line construction where he worked for Post & Brown and Wheatland Electric. Later, Andrew worked for IBP and Con-Agri.

A graveside service will be held at 2:30 p.m. on Friday, September 27, 2019 at Valley View Cemetery in Garden City with Pastor Jon Sanders officiating. There will be no calling hours. The family suggests memorials given to the Andrew Allen Memorial Fund in care of Garnand Funeral Home of Garden City.
Read Less

We encourage you to share your most beloved memories of Andrew here, so that the family and other loved ones can always see it. You can upload cherished photographs, or share your favorite stories, and can even comment on those shared by others. 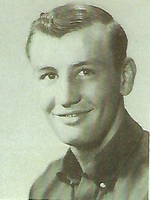