To share your memory on the wall of Lois Avalon, sign in using one of the following options:

Lois grew up in the Petersburg, Nebraska area. She attended St. John’s Catholic School where she graduated from high school in 1968. Lois later worked at the hospital in Albion, Nebraska. She moved to southwest Kansas in 1980 living in Lakin, Deerfield and Garden City. A homemaker, Lois later worked for H&R Block before working at Wal-Mart. After 18 years with Wal-Mart, Lois retired in 2012. She was a member of St. Dominic Catholic Church in Garden City and she enjoyed knitting and quilting.

Receive notifications about information and event scheduling for Lois

We encourage you to share your most beloved memories of Lois here, so that the family and other loved ones can always see it. You can upload cherished photographs, or share your favorite stories, and can even comment on those shared by others.

Posted Sep 26, 2019 at 03:18pm
I remember Lois, she was so nice when we worked together at Walmart..
Rest in Peace Lois you will be greatfully missed.. 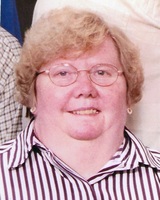