To share your memory on the wall of Brian Berry, sign in using one of the following options:

Brian has been a lifetime resident of Garden City where he attended Garden City schools. He has worked as a roofing foreman for Berry Roofing. Brian was a member of the Garden City Family YMCA and he enjoyed bowling, fishing, NASCAR, working on cars and computers, and was an avid fan of the Kansas City Chiefs and KU Basketball.

Funeral services will be held at 2:00 p.m. on Monday, September 30, 2019 at Cornerstone Church in Garden City with Pastor Hannah Richmeier officiating. Burial will follow at Valley View Cemetery in Garden City. Friends may call from Noon to 8:00 p.m. on Sunday at Garnand Funeral Home in Garden City. The family suggests memorials given to the Brian Berry Memorial Fund in care of the funeral home.
Read Less

Receive notifications about information and event scheduling for Brian

Posted Sep 29, 2019 at 02:30am
You were such an awesome person when I was feeling down about losing my son nathyn we would just talk about nathyn and Chloe and how they are up there playing together! Now you have ur precious girl in ur arms . Hug nathyn for me and look after him untill I get there . The 2nd to last time I seen you u hugged me tight and told me everything was gonna be alright I'll never forget that or our last conversation! You were just an awesome person an an amazing friend . Much love untill we meet again . And when we all get there with you and the rest of our lives ones it's gonna be a glorious day .
Comment Share
Share via:

Posted Sep 26, 2019 at 08:26pm
At this sorrowful period in your life, please accept my sincerest condolences for the death of your loved one.  Reflecting on the divine promises found in the Bible will give you hope and strength to keep going until all of God's promises are fulfilled. (Romans 15:13; John 5:28, 29). 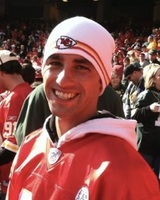