To share your memory on the wall of Glenn Brewer, sign in using one of the following options:

Glenn attended school through the 5th grade at the Triumph School where his mother taught. He started school in Elkhart his 6th grade year where he would graduate from Elkhart High School. He received a football scholarship from Oklahoma Panhandle State University (then Panhandle A&M) and played all four years and was a member of the All Star Football team his senior year. After graduating from OPSU, he joined the Army for two years, serving one year in Germany. After his discharge from the service, Glenn returned to the farm to help his dad with the farming and ranching.

Glenn enjoyed raising and showing Quarter Horses and roping in his younger years. He enjoyed fishing and hunting. Papa Brew, as he was affectionately known, loved to watch his kids, grandchildren and great grandchildren compete in sports and music events and traveled many miles to watch them. He was a member of the Elkhart First Church of God and served on many boards and committees over the years. Glenn had a love of music and played guitar and bass for many years in the worship band at church and at cowboy gatherings.

Survivors include one son, Tom Brewer and wife Rena of Elkhart; their children, Michael, Mica, and Miranda; one daughter, Jolinda Brumley and husband Rick of Borger, Texas, and their daughter, Jenna; 4 great-grandchildren, Shaylee, Lance, Regan and Clayson; one sister, Ruth Simmons and husband Ivan of Elkhart, and sister-in-law, JoAnne Haar of Elkhart.

Glenn is preceded in death by his parents; wife, Selma; and sister, Minnie Lou Chestnut.

Funeral Service will be held Tuesday, October 8, 2019 at 10:00 a.m. at the First Church of God, Elkhart, Kansas with Pastor Denny Huebner officiating. Burial will follow at the Elkhart Cemetery, Elkhart, Kansas, with military rites by Point Rock Post #3162. Friends may call on Monday, October 7, 2019 from 2:00 p.m. until 8:00 p.m. with family present from 6:00 p.m. until 8:00 p.m. at Garnand Funeral Home, Elkhart, Kansas. Memorial contributions may be given to the First Church of God youth group in care of Garnand Funeral Home, P.O. Box 854, Elkhart, KS 67950. Condolences may be posted at www.garnandfuneralhomes.com.
Read Less

Receive notifications about information and event scheduling for Glenn

We encourage you to share your most beloved memories of Glenn here, so that the family and other loved ones can always see it. You can upload cherished photographs, or share your favorite stories, and can even comment on those shared by others. 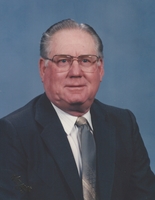