To share your memory on the wall of Jean Gray, sign in using one of the following options:

As a child, Jean moved with her family to Roseville, Califor... Read More
Jean Gray, 89, died Friday, October 11, 2019 at The Cottages in Garden City. She was born May 10, 1930 in Pratt, Kansas the daughter of Floyd & Mabel (Greenstreet) Smith.

As a child, Jean moved with her family to Roseville, California where she attended school and graduated from high school. On December 23, 1950, she married Paul E. Gray in Pratt, Kansas. They moved to Garden City in 1966 and have lived in Garden City since. A homemaker, Jean later worked and retired from USD #457 as a paraprofessional. She was a member of Bible Christian Church in Garden City and enjoyed sewing, reading, and watching western movies especially “Yellowstone”.

Survivors include four children Paula Dies of Lehigh, Kansas, Patricia Stubbs of Garden City, Gail Moore of Garden City, and Douglas Gray of Miami, Florida; a sister Nancy Foster of Roseville, California; six grandchildren; and six great-grandchildren. Jean is preceded in death by her husband Paul who died on June 1, 2018. She is also preceded in death by her parents and an infant son.

Receive notifications about information and event scheduling for Jean

We encourage you to share your most beloved memories of Jean here, so that the family and other loved ones can always see it. You can upload cherished photographs, or share your favorite stories, and can even comment on those shared by others. 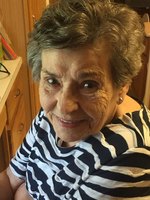