To share your memory on the wall of Karen Johannes, sign in using one of the following options:

Karen grew up as a child in the Sc... Read More
Karen Dee Johannes, 70, died Thursday, October 10, 2019 at The Ranch House in Garden City. She was born December 9, 1948 in Scottsbluff, Nebraska the daughter of Eugene & Helen (Sturgeon) Andrews.

Karen grew up as a child in the Scottsbluff, Nebraska area where she attended school. She later attended high school and graduated in 1967 from Goshen Hole High School in Veteran, Wyoming. Karen then attended and graduated from the Rapid City School of Business. On January 30, 1970, she married Lawrence Edward “Larry” Johannes in Scottsbluff, Nebraska. They lived in Lincoln, Nebraska before moving to Garden City in 1976 where they have lived since. In her early years, Karen worked for Hiram Scott College. A homemaker, she and her husband Larry owned and operated Spray Way Lawn Care for twenty five years. Karen enjoyed yard work and home interior decorating.

Survivors include three sons Matthew & Sara Johannes of Garden City, Joshua & Emily Johannes of Kirbyville, Missouri and Caleb Johannes of Kirbyville, Missouri; her mother Helen Andrews of Torrington, Wyoming; a brother Greg & Susy Andrews of Torrington, Wyoming; and many grandchildren and great-grandchildren. Karen is preceded in death by her husband Larry who died on June 17, 2019. She is also preceded in death by her father; two daughters Traci Johannes and Sarah Avila; and a brother John Andrews.

A private family interment will take place at a later date at Valley View Cemetery in Garden City. There will be no calling hours.
Read Less

Receive notifications about information and event scheduling for Karen

We encourage you to share your most beloved memories of Karen here, so that the family and other loved ones can always see it. You can upload cherished photographs, or share your favorite stories, and can even comment on those shared by others.

Posted Oct 17, 2019 at 04:29pm
So saddened to hear of Karen's passing. She was truly an angel on earth....now she is an angel in heaven. I have the happiest memories of the crazy times Karen and I had in high school. We became best friends and maintained that friendship over the years. Karen dealt with the challenges in life with love and dignity. I will miss her so very much. May she rest in peace.

Posted Oct 15, 2019 at 09:46pm
Dear Family of Karen
I have know Karen for many years and she was the sweetest friend, She always had a kind word and loved the Lord.. She loved her family so very much and talked about them often. I know she is basking in the light of our Lord and Savior and I will miss her terribly. Thank you for sharing her with so many people who love her.
Praying for your family during this time of loss. 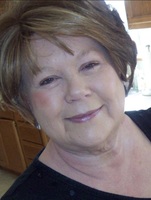