To share your memory on the wall of Virgil Martin, sign in using one of the following options:

Provide comfort for the family of Virgil Martin with a meaningful gesture of sympathy.

Sonny attended Sunrise Country School in Finney County. He served in the 21st Artillery Division of the United States Army. After his discharge he farmed and ranched for Harold Mulville and Charles Bosley in Lane County and then went to work for the Farmers Co-op Elevator in Dighton until he retired. He was a member of the American Legion Post # 190 of Dighton. He was a member of the Pawnee Valley Boys band that played for dances and events in the area as the guitarist and vocalist. He enjoyed dancing, playing cards, fishing, hunting, boating, camping and in later years bingo but especially playing music with his family and friends. He was preceded in death by his Parents, 2 Brothers- Herman “Bud” Martin and Roy “Barney” Martin, 3 Sisters- Erma Martin, Marian Buell and Edith Snyder and Sister-In-Law- Charlotte Martin.

Funeral Service will be at 10:30 AM Wednesday at the United Methodist Church in Dighton with Rev Berniece Ludlum officiating. Burial will be in Dighton Memorial Cemetery with military honors by American Legion Post # 190 Honor Guard and Kansas Army National Guard Honor Guard. Memorials are suggested to American Legion Post # 190 Honor Guard or the J.O.Y Center in care of Boomhower Funeral Home. Condolences may be posted at www.garnandfuneralhomes.com

We encourage you to share your most beloved memories of Virgil here, so that the family and other loved ones can always see it. You can upload cherished photographs, or share your favorite stories, and can even comment on those shared by others. 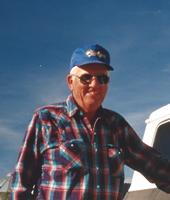