To share your memory on the wall of Larry Schultz, sign in using one of the following options:

Provide comfort for the family of Larry Schultz with a meaningful gesture of sympathy.

Larry grew up and attended school in Lucas where he graduated from high school in 1984. On September 19, 1987, he married Cynthia Marie Eck in Lucas, Kansas. They moved to Salina and later to Garden City. A truck driver, Larry worked in dirt construction. He later worked for Lightner Welding Supply and Heat Waves Hot Oil Service. Larry enjoyed NASCAR, hunting, and going to the lake.

A memorial service will be held at 11:00 a.m. on Saturday, November 9, 2019 at the Lucas United Methodist Church in Lucas, Kansas. Burial will take place at the Lucas Cemetery. There will be no calling hours. The family suggests memorials given to the Larry Schultz Memorial Fund in care of Garnand Funeral Home of Garden City.
Read Less

We encourage you to share your most beloved memories of Larry here, so that the family and other loved ones can always see it. You can upload cherished photographs, or share your favorite stories, and can even comment on those shared by others. 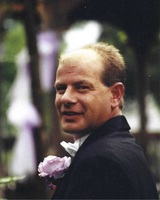