To share your memory on the wall of Gigi Rowland, sign in using one of the following options:

Provide comfort for the family of Gigi Rowland with a meaningful gesture of sympathy.

Gigi grew up in Garden City. She attended St. Mary Grade School and then Garden City Public Schools. She graduated from Garden City High School in 1976. Gigi remained in Garden City until the 1990’s when she moved to Wichita, Kansas. Gigi worked for the Finney County Sheriff’s Office and UPS. She also served in the Kansas Army National Guard. An avid sports fan, she loved playing softball, the outdoors, music, and helping people.

A memorial service will be held at 11:00 a.m. on Saturday, November 9, 2019 at Cornerstone Church in Garden City with Raul Silva officiating. A private family burial will take place at a later date. There will be no calling hours. The family suggests memorials given to the Gigi Rowland Memorial Fund in care of Garnand Funeral Home of Garden City.
Read Less

We encourage you to share your most beloved memories of Gigi here, so that the family and other loved ones can always see it. You can upload cherished photographs, or share your favorite stories, and can even comment on those shared by others.

Posted Nov 09, 2019 at 10:20am
Gigi was a special person. Becky, Stacy, Dan, & I enjoyed so many adventures with Gigi not only through softball, but also taking family trips together. We regret losing contact with Gigi, but we will never forget the kind and fun-loving spirit Gigi always showed. Though we are sad to hear this news, we hope you will celebrate the generous and loving spirit she leaves with her family and friends. We’re sorry we just heard of this today or we would have come from Table Rock Lake to be there with her family to celebrate her wonderful legacy.
Comment Share
Share via:
DS

Posted Nov 08, 2019 at 04:08pm
I am so sorry to hear of Gigi's passing. What a wonderful bright light she was to her family and friends. May you find comfort in your wonderful memories during this difficult time.
Comment Share
Share via:
DB

Posted Nov 07, 2019 at 03:40pm
Izzy and family, I'm so sad to read about Gigi's passing. Just want you to know I'm thinking of you during this time. I have a lot of memories of Gigi from the softball fields in Garden City. She had such a great personality! God bless you and keep you.

Posted Nov 06, 2019 at 03:36pm
Lonnie, Izzy and all your family - I am so sorry to hear about the loss of your sister, GiGi. She was such an avid softball player and did enjoy coming to Tom's after the games. May God wrap his arms around you especially at this time and give you his peace. Joyce McGaughey & family
Comment Share
Share via: 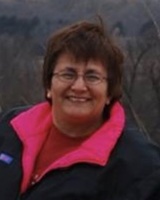