To share your memory on the wall of Betty Parks, sign in using one of the following options:

Provide comfort for the family of Betty Parks with a meaningful gesture of sympathy.

Betty grew up in Rocky Ford and attended school there. She worked in the fields and was a waitress in the Rocky Ford area. After she moved to Denver in 1954, she worked at Russell Stover making candy. Betty married Richard E. Parks on December 9, 1972, in Elko, Nevada. In 1992, she moved to Hugoton where she made her home until 2013 when she moved to Johnson. Betty enjoyed sewing and quilting.

Memorial graveside service will be Saturday, December 7, 2019, at 2:00 p.m. at Hugoton Cemetery in Hugoton, Kansas, with Erik Miravete officiating. Memorials may be given to COPD Foundation in care of Garnand Funeral Home, PO Box 715, Johnson, Kansas 67855.
Read Less

We encourage you to share your most beloved memories of Betty here, so that the family and other loved ones can always see it. You can upload cherished photographs, or share your favorite stories, and can even comment on those shared by others.

Posted Dec 03, 2019 at 09:17am
So sorry for your loss, She was a neat lady and I will always remember her in being in Pawnee City and spending alot of time at her house.
Comment Share
Share via: 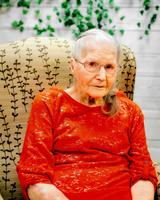