To share your memory on the wall of Nancy Porter, sign in using one of the following options:

Print
Nancy Jo Porter, 56, went to be with her Lord and Savior on Wednesday, December 4, 2019 at St. Catherine Hospital in Garden City. She was born January 26, 1963 in Garden City, the daughter of Rex & Kathaleen (Zubeck) Porter.

Nancy ... Read More
Nancy Jo Porter, 56, went to be with her Lord and Savior on Wednesday, December 4, 2019 at St. Catherine Hospital in Garden City. She was born January 26, 1963 in Garden City, the daughter of Rex & Kathaleen (Zubeck) Porter.

Nancy has been a lifetime resident of Garden City. She attended Garden City schools and graduated from Garden City High School. Nancy was a girl scout in her younger years. She was also a member of Missionettes and volunteered for the Salvation Army. She enjoyed shopping, holding babies, stuffed animals, coloring, kitties and doggies, word search puzzles, and listening to music.

Funeral services will be held at 2:00 p.m. on Saturday, December 7, 2019 at First Assembly of God in Garden City with Pastor Nathan Sheridan officiating. Burial will follow at the Deerfield Cemetery in Deerfield, Kansas. There will be no calling hours. The family suggests memorials given to the Nancy Jo Porter Memorial Fund in care of Garnand Funeral Home of Garden City.
Read Less

Receive notifications about information and event scheduling for Nancy

We encourage you to share your most beloved memories of Nancy here, so that the family and other loved ones can always see it. You can upload cherished photographs, or share your favorite stories, and can even comment on those shared by others. 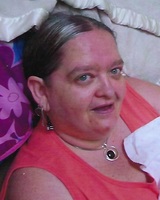