To share your memory on the wall of Mary Hass, sign in using one of the following options:

Mary attended school and graduated from high school in Graham, Missouri. In 1947, she married Robert D. Lowrance. They later divorced. A homemaker, Mary worked as an LPN for a short time before meeting the love of her life, and in 1973 she married Hale O. Hass. Together, they loved to travel and were members of the Good Sam RV Club and the Airstream Travel Club. Mary also enjoyed knitting and nature, especially bird watching. Mary moved to Garden City from Kansas City, Missouri in 2014.

A family interment will take place at a later date in Grant City, Missouri. There will be no calling hours. The family suggests memorials given to Garden Valley Retirement Village in care of Garnand Funeral Home of Garden City.
Read Less

Posted Dec 27, 2019 at 03:44pm
I was Mary's housekeeper at Garden Valley. We would talk the entire time i cleaned. Mary had so many stories to tell. I will greatly miss her. my thoughts are with you all. Jolene Sanford
Comment Share
Share via: 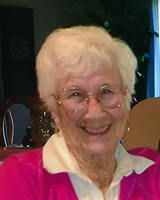