To share your memory on the wall of Brian Heath, sign in using one of the following options:

Provide comfort for the family of Brian Heath with a meaningful gesture of sympathy.

Brian attended early schooling at a local handicapped teaching school in Dighton. He then attended the Beamgard Learning Center in Atwood until he was 21 years old. He moved to Garden City in 1981 to become part of SDSI which later became Mosiac. He participated in the Mosiac employment opportunities by being a bagger at Dillons, on the cleaning crew at KDOT and Sunflower Electric, Dish Washer at the Hilton, on a yard crew and the belt manufacturing team. In 2018 he moved back to Dighton. He was a member of St Theresa Catholic Church in Dighton and really enjoyed his Salvation Army membership. He enjoyed motorcycles, watching the Kansas City Chiefs and Kansas State Universities teams and cheering on Hulk Hogan in the WWE. He was preceded in death by his Parents, Sister- Chris Heath, Brother- Joe Heath, Brother-In-Law- Allan Smeltzer, Nephew- Kevin James and Great-Nephew- Baylor James.

He is survived by his Brother- Steve & Mary Heath of Dighton and 4 Sisters- Susan Smeltzer and Betty & Larry Haas both of Augusta and Carolyn & Brent Dutoit and Marilyn & Alan James, and Sister-In-Law Trudy Heath all of Dighton and many Nieces and Nephews.

Funeral Mass will be at 11:00 AM Wednesday at St Theresa Catholic Church with Rev Warren Stecklein as Celebrant. Burial will be in Dighton Memorial Cemetery. Memorials are suggested to Lane County Hospital or St Theresa Catholic Church in care of Boomhower Funeral Home. Friends may call from Noon to 8:00 PM Tuesday at Boomhower Funeral Home. Condolences may be posted at www.garnandfuneralhomes.com

Posted Jan 07, 2020 at 03:52pm
Thank you for all the memories Brian "Hulk" Heath! Although I am unable to be there to celebrate your life, your joy, your easy going attitude, please know that I have missed you and will miss you all the more until we meet again in the Glory of God's presence.
Comment Share
Share via:
RN

Posted Jan 07, 2020 at 03:52pm
Thank you for all the memories Brian "Hulk" Heath! Although I am unable to be there to celebrate your life, your joy, your easy going attitude, please know that I have missed you and will miss you all the more until we meet again in the Glory of God's presence.
Comment Share
Share via:

Posted Jan 06, 2020 at 10:59pm
Brian will definitely be missed. He had such a wonderful warm personality and his heart was golden. It was a pleasure being his officer, his pastor, and his friend. God definitely blessed us by allowing us to share in Brian's life. He was a faithful soldier at The Salvation Army and served His Savior well. Posted Jan 06, 2020 at 04:26pm
I had the honor of attending Brian's induction as a Soldier in the Salvation Army. His smile was from ear to ear and he was so proud to wear his uniform. Heaven has gained a beautiful soul and deepest sympathy to his family for their loss. Vickie Harshbarger, Community Relations Manager, Mosaic of Garden City. 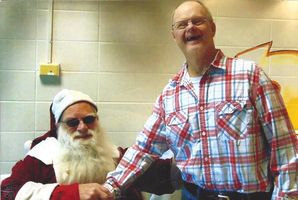 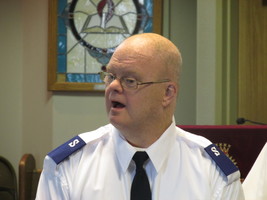 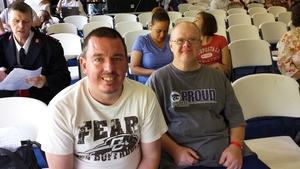