To share your memory on the wall of Dennis Michel, sign in using one of the following options:

Provide comfort for the family of Dennis Michel with a meaningful gesture of sympathy.

Dennis grew up and attended primary school in Lakin, graduat... Read More
Dennis D. Michel , 77, died Wednesday January 8, 2020 at his home in Finney County. He was born January 27, 1942 in Lakin, Kansas, the son of Leo R. and Gladys (Murray) Michel.

Dennis grew up and attended primary school in Lakin, graduating in 1960. From there he went on to receive his degree in Criminal Investigation. He enlisted in the United States Marine Corps serving in the Vietnam Conflict for almost four years, before returning home to help on the family farm after his father passed way. He met the love of his life on a flight from Minneapolis and although it took some convincing on his part, by the end of that flight the two of them had a connection that lasted their lifetimes. He Married Marsha Helm June 6, 1970 in Garden City.

Growing up Dennis was ornery, he and his sister gave their older brother many fits with the stunts they pulled. Dennis was a friend to all; he was kind and generous, full of wit and had a smile that was nothing short of contagious. He enjoyed helping family with harvest, boating, fishing, and summers joyfully shared with his grandchildren. After Marsha’s passing in 2001 Dennis took on many new responsibilities, most notably would be the care of their son Duane. The two of them could often be found driving to the shooting range in the Polaris Ranger.

Funeral Service will be held at 10:30 AM Tuesday, January 14, 2020 at the First Assembly of God in Garden City with Pastor Nathan Sheridan officiating. Burial will follow at Valley View Cemetery with Military Rites by the United States Marine Corps Honor Guard and American Legion District #8 Honor Guard. Friends may call Monday January 13, 2020 from noon to 8 pm, with the family present to receive friends from 4-6 pm at Garnand Funeral Home, Garden City. Memorial contributions are suggested to the Special Olympics or the First Assembly of God both in care of the funeral home.

We encourage you to share your most beloved memories of Dennis here, so that the family and other loved ones can always see it. You can upload cherished photographs, or share your favorite stories, and can even comment on those shared by others. 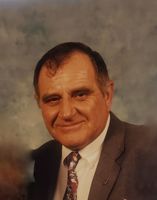