To share your memory on the wall of LeRoy Ladner, sign in using one of the following options:

There is a Marine motto stating “Once a Marine, always a Marine.” LeRoy continued this motto even as he and his family returned home to Ulysses where he completed another 20 plus year career as Manager of Gibson’s before retiring.

He was a member of The Church of Jesus Christ of Latter-day Saints.

LeRoy was preceded in death by his wife of 62 years, Beth. He is survived by sons, Dale Ladner and wife Amy of Kansas City, Missouri, and Robert Ladner of Overland Park, Kansas; daughter, Vicki Ladner of Hutchinson, Kansas; and four grandchildren, Ben, Spencer, Nate and Sara.

Receive notifications about information and event scheduling for LeRoy

We encourage you to share your most beloved memories of LeRoy here, so that the family and other loved ones can always see it. You can upload cherished photographs, or share your favorite stories, and can even comment on those shared by others.

Posted Jan 24, 2020 at 01:17pm
We were saddened when we learned of your father’s death. LeRoy was a wonderful friend and co-worker. He was respected by all the people that worked with him. Please accept our heartfelt condolence of your father’s death. May our Lord bless and comfort you and your family during this time of grief. With Sympathy, Kent and Sandra Carmichael 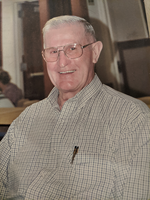