To share your memory on the wall of Larry Combs, sign in using one of the following options:

Provide comfort for the family of Larry Combs with a meaningful gesture of sympathy.

Larry has lived most of his life in the Deerfield area. He attended Deerfield schools and graduated from Deerfield High School in 1963. On June 6, 1964, he married Arlene Rupp in Garden City. Larry later married Beverly Brungardt on February 1, 1974 in Hutchinson, Kansas. Larry first began his working career as a farmer. He later became owner and operator of a dirt construction company before becoming a dealer for Snap-On Tools. He was a member of the Deerfield United Methodist Church, served as a Boy Scout leader, Deerfield Brotherhood, served on the Deerfield USD #216 Board of Education, and served on the Kearny County Commission for twelve years. Larry enjoyed spending time with his grandchildren, hunting, coin collecting, ice, tools, and visiting with people and telling stories.

Funeral services will be held at 10:30 a.m. on Friday, January 17, 2020 at Garnand Funeral Home in Garden City with Von Hunn officiating. Burial will follow at the Deerfield Cemetery in Deerfield, Kansas. Friends may call from 5:00 p.m. to 8:00 p.m. on Wednesday and from 9:00 a.m. to 8:00 p.m. on Thursday all at Garnand Funeral Home in Garden City. The family suggests memorials given to St. Jude’s Children’s Research Hospital in care of the funeral home.
Read Less

We encourage you to share your most beloved memories of Larry here, so that the family and other loved ones can always see it. You can upload cherished photographs, or share your favorite stories, and can even comment on those shared by others. 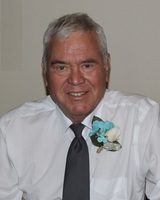