To share your memory on the wall of Edna Hall, sign in using one of the following options:

Provide comfort for the family of Edna Hall with a meaningful gesture of sympathy.

Edna Marie Hall, age 107, died on Saturday, January 18th, 2020 at the Kansas Masonic Home, Wichita, Kansas. She was born January 31st, 1912 at her home in McPherson County, near Conway, Kansas in the middle of a snowstorm. She was the daughter of George Schmalzried and Mary (Geiman) Schmalzried.
When Edna was 5 years old, her family moved to a farm near Dighton, Kansas. Edna grew up milking the cows before going to school in town. She made the 5 mile trip by horse and buggy every day. She loved school and graduated from Dighton High School in 1931.

After graduation, she worked as a night telephone operator and was on the phones the night a huge dust storm took out the lines in Lane County. When Edna married Freeman Charles Hall in 1935, they moved to Pendennis, Kansas and the farm that had been in Freeman’s family since the 1880’s. They moved several times within Lane County but finally moved in to a home on Lane Street in Dighton in 1957. She lived there until 2018, when she moved to Wichita.

In Dighton, Edna worked for Dr. George as a receptionist, the Dighton Herald newspaper and the flower shop. She finally retired when she was 90 years young.
Edna was a lifelong member of the First Christian Church and taught Sunday school for many years. She also was a Cub Scout leader when her sons were in Scouts. She was a member of the Order of the Eastern Star Dighton Kansas Chapter 241 and had served as a Worthy Matron. Edna loved to bowl and belonged to a Dighton bowling league, bowling 2 nights a week. She bowled until she was 104, even competing in the 2014 Kansas State Championship in Wichita.

Funeral will be at 2:00 PM on Saturday at the First Christian church in Dighton with Rev Aerii Smith officiating. Burial will be in Dighton Memorial Cemetery. Memorials are suggested to First Christian Church or Lane County Historical Society in care of Boomhower Funeral Home. Friends may call from Noon to 8:00 PM Friday and 9:00 AM to 11:00 AM Saturday at Boomhower Funeral Home in Dighton. Condolences may be posted at garnandfuneralhomes.com

We encourage you to share your most beloved memories of Edna here, so that the family and other loved ones can always see it. You can upload cherished photographs, or share your favorite stories, and can even comment on those shared by others.

Posted Jan 30, 2020 at 11:00am
My name is Peggy Lawrence Rombough and my grandparents (Jake and Ruth Lawrence) lived next door to Edna and Freeman all of my growing up years. I read in our local Active Aging paper that Edna had moved to the Masonic home and was about to celebrate her 107th birthday so I decided to go see her and wish her a "Happy Birthday". Of course, she didn't know who I was until I introduced myself. We had a wonderful visit for about 20 minutes and I found her to be amazing. She was sharp and funny and truly an inspiration. Her hairdresser at the Masonic Home is a personal friend of mine and kept me updated on Edna the last year. I was so sorry to hear of her passing. We can all be grateful to have known this amazing woman who enjoyed life to its fullest until the very end. May she rest in peace!

Posted Jan 22, 2020 at 05:27am
We have lived in Thailand for the last twenty years, but we always tried to visit Aunt Edna when we were in the area. Our family so enjoyed chatting with her. She was an inspiration not only to us, but also to our Thai friends when we would share about her. They were in awe of how active she was! We also had the privilege of hosting her great granddaughter Abbie in Thailand which was such a treat. Our family sends our condolences and prayers to you all who will be gathering to celebrate Edna's life. Wish we could be there! Love, Andy, Carmen, Connor, Isaac, & JJ Owen Posted Jan 21, 2020 at 12:32am
Everyone who knew Aunt Edna was in awe of her. She was beautiful, stylish, creative, had unending energy, and was always doing for others. A funny memory I have is a time when she came to Cincinnati and Kentucky to visit. We went shopping. She must have tried on 50 items of clothing. We waited for her for at least two hours while she studied and studied and STUDIED how they looked, contemplated if things would blend in with other things she already had. Everything looked fabulous on her. After ALL that time and waiting, she said "I really don't need anything", and didn't buy a single thing!
Comment Share
Share via: 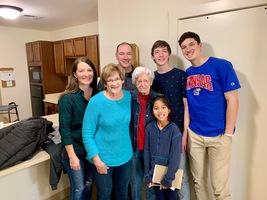