To share your memory on the wall of Doris Matthews, sign in using one of the following options:

Provide comfort for the family of Doris Matthews with a meaningful gesture of sympathy.

Doris graduated from Scott City High School and moved to Garden City in 1960. She worked at Cree-mee Drive In and St Catherine Hospital. After raising her family she worked in housekeeping at Garden Valley Retirement Village until retiring. She enjoyed crossword puzzles, science fiction shows and in her earlier years bowling. She was preceded in death by her Parents and 3 Sisters- Imogene Long, Virginia Bush and Mary Bush.

There will be a celebration of life later in the spring with burial will be in Valley View Cemetery in Garden City. Memorials are suggested to Garden Valley Retirement Village in care of Garnand Funeral Home. Condolences may be posted at www.garnandfuneralhomes.com

We encourage you to share your most beloved memories of Doris here, so that the family and other loved ones can always see it. You can upload cherished photographs, or share your favorite stories, and can even comment on those shared by others. 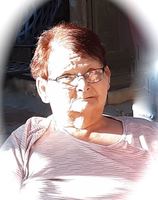