To share your memory on the wall of Eva Williams, sign in using one of the following options:

Provide comfort for the family of Eva Williams with a meaningful gesture of sympathy.

Eva grew up in Omaha, Nebraska where she attended school and graduated from high school in 1957. She then attended the University of Nebraska at Omaha where she earned a Bachelor’s degree in Physical Education in 1961. Eva later earned a Master’s degree in Physical Education from Colorado State University in 1968. Eva worked as a teacher in Omaha from 1961 to 1968. She moved to Baldwin City, Kansas where she taught at Baker University from 1967 to 1972. On March 30, 1968, she married Roy Williams in Baldwin City, Kansas. In 1972, they moved to Dodge City, Kansas where Eva worked as a substitute teacher, a mother and as a car rental agent. In 1980, Eva and Roy moved to Garden City, Kansas where they have lived since. She continued working as a car rental agent, and later as a residential supervisor at SDSI. Eva was a member of St. Dominic Catholic Church in Garden City and the Newman Club. She enjoyed being around people, watching her children play sports, and her church activities.

We encourage you to share your most beloved memories of Eva here, so that the family and other loved ones can always see it. You can upload cherished photographs, or share your favorite stories, and can even comment on those shared by others.

Posted Jan 29, 2020 at 11:21am
My sympathy, especially to you, Roy. You have been a faithful caregiver; seldom is one found more devoted. My prayers are with you during these days. I am sorry I was unable to get to Garden City
Comment Share
Share via: 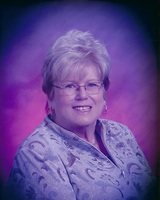