To share your memory on the wall of Tracy Pettit, sign in using one of the following options:

Provide comfort for the family of Tracy Pettit with a meaningful gesture of sympathy.

Tracy graduated from Lincoln Northeast High School in 1972. He received his Bachelor’s degree in Computer Science thru the Engineering department from the University of Nebraska- Lincoln. He worked for Lincoln Electric System in Lincoln and NPPD (Nebraska Public Power District) in Doniphan, Nebraska before moving to Garden City, Kansas in 2012. He currently was the EMS/SCADA Administrator for Sunflower Electric Power Corporation. He was preceded in death by his Parents and Brother- Scott Pettit.

Memorial Service will be at 1:00 PM on Saturday, January 25, 20020 at First Presbyterian Church, 621 North Lincoln Avenue in Hastings, Nebraska.. Memorials are suggested to Tracy Pettit Memorial Fund in care of Garnand Funeral Home. Condolences may be posted at www.garnandfuneralhomes.com

We encourage you to share your most beloved memories of Tracy here, so that the family and other loved ones can always see it. You can upload cherished photographs, or share your favorite stories, and can even comment on those shared by others. 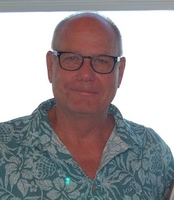