To share your memory on the wall of Gale Turner, sign in using one of the following options:

Provide comfort for the family of Gale Turner with a meaningful gesture of sympathy.

Gale spent his childhood in Elkhart and graduated from Elkhart High School in 1958. He spent two years in Garden City Junior College before being inducted into the U.S. Army in 1963. He served at Fort Knox, Kentucky, before beginning an overseas tour of duty in South Korea. After the Army, he worked for Turner Truck Line, and farmed some. In 1966, he began working for Bankers Dispatch Corp. which later became Gelco Courier Corp. and then Pony Express Courier Corp. of America. In 1971, Gale married Carolyn Hayes, the daughter of Norman and Vera Hayes of St. John, Kansas. He met his bride while working as a Bank Courier Guard in St. John. To this union was born one daughter, Glenda Joyce Turner, on July 31, 1972, who currently lives in Sterling, Kansas. Gale worked as a Courier Guard for 42 years, retiring in 2007 due to health issues. Gale and his wife moved from Elkhart to Sterling in 2009, where they currently reside. He was a member of the United Methodist Church of Elkhart, and was an avid piano player.

Gale is preceded in death by his parents; and brother, Marvin.

Graveside service will be Monday, January 27, 2020, at 2:00 p.m. at the Elkhart Cemetery in Elkhart, Kansas, with Pastor Shella Choi officiating. Military rites will be conducted by Point Rock Post #3162. Family requests memorials be given to the United Methodist Church of Elkhart in care of Garnand Funeral Home, P.O. 854, Elkhart, Kansas 67950.
Read Less

We encourage you to share your most beloved memories of Gale here, so that the family and other loved ones can always see it. You can upload cherished photographs, or share your favorite stories, and can even comment on those shared by others.

Posted Jan 26, 2020 at 04:39pm
Sorry that we can't make it to Gale's funeral because of other commitments. One of my strongest memories of Gale goes all the way back to 1958, the year he graduated from high school. He and I and another Elkhart native (a Coen, sorry I don't remember his first name) took a "senior trip" which was supposed to be a about a week long. We went to Colorado, then Yellowstone and the Black Hills--and finally got home about 2 and a half weeks later. Our folks weren't too happy, but we had a blast!

Posted Jan 25, 2020 at 07:50am
My memory has to be listening to him play the piano at the Elkhart United Methodists Church. He had a God given talent.
Comment Share
Share via: 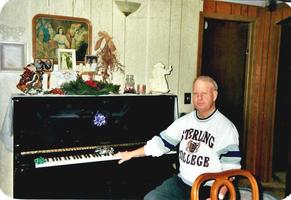