To share your memory on the wall of C. Shannon Dimitt, sign in using one of the following options:

Provide comfort for the family of C. Shannon Dimitt with a meaningful gesture of sympathy.

Print
C. Shannon Dimitt, age 77, died in Johnson City, Kansas, on January 26, 2020, surrounded by his family. He was born to Mary Margaret Jones and Victor Thomas Dimitt in Garden City, Kansas, on November 1, 1942.

Shannon attended school in Stanton County, graduating in 1960. He attended college part-time at Fort Hays State University in Hays, Kansas, majoring in mathematics, while running the family farm. Upon graduation, he took over the family farm. He ran the farm until his retirement in 2011. Shannon married Karla Kay Raile on April 9, 1983.

Shannon obtained his pilot’s license in 1969 and that began a lifelong passion for flying. He also loved riding motorcycles, a passion he shared with his wife. He frequently attended air shows and sought out motorcycle museums across the country. Shannon also had a love of history, specifically the history surrounding the Santa Fe Trail. His motorcycle trips often took him to historical landmarks and museums, and he was known for striking up conversations with local residents along the Santa Fe Trail. Shannon also felt a need to contribute to the local community and served as a Stanton County Commissioner from 1991 to 2015.

Shannon was preceded in death by his mother, his father, and his brothers, William Wesley Dimitt and Robert Victor Dimitt.

The family appreciates the excellent care Shannon received in his final days at the Stanton County Hospital and the care provided by Elizabeth Bailey.

We encourage you to share your most beloved memories of C. Shannon here, so that the family and other loved ones can always see it. You can upload cherished photographs, or share your favorite stories, and can even comment on those shared by others. 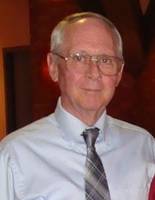