To share your memory on the wall of Patsy Hapes, sign in using one of the following options:

Provide comfort for the family of Patsy Hapes with a meaningful gesture of sympathy.

Patsy moved with her family to Tribu... Read More
Patsy Anne Hapes, 78, died Tuesday, January 28, 2020 at her home in Garden City, Kansas. She was born November 21, 1941 in Hutchinson, Kansas the daughter of David & Frances (Wilcox) Stephenson.

Patsy moved with her family to Tribune, Kansas when she was very young. She attended Tribune schools and graduated from Greeley County High School in 1959. She then attended and graduated from cosmetology school in Hutchinson. On October 22, 1961, she married Arlen Hapes in Tribune, Kansas. They moved to Garden City where they have lived since. A homemaker, Patsy owned her own beauty shop for a short time in Tribune. She also worked as the bookkeeper for Hapes Trucking. Patsy enjoyed dancing and she was an avid Kansas City Chiefs fan.

A private family interment will take place at a later date at Valley View Cemetery in Garden City. There will be no calling hours. The family suggests memorials given to the Heartland Cancer Center in care of Garnand Funeral Home of Garden City.
Read Less

We encourage you to share your most beloved memories of Patsy here, so that the family and other loved ones can always see it. You can upload cherished photographs, or share your favorite stories, and can even comment on those shared by others.

Posted Feb 03, 2020 at 09:34am
Arlen and family,
I am so very sorry for your loss. I always thought Pat was just stunning. The photo just shows how beautiful she was. Her shining golden hair and warm smile. You just had to smile back whenever you saw her. Please accept my sincere sympathy and the thoughts and prayers of all the GCHS class of 1958.
With love,
Marilee Miller
Comment Share
Share via: 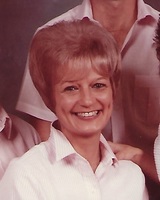