To share your memory on the wall of Juanita Smith, sign in using one of the following options:

Provide comfort for the family of Juanita Smith with a meaningful gesture of sympathy.

Juanita grew up with her sisters on the family homestead north of Big Bow on the Big Bow Grade. As a young girl, she helped her grandma in the store at Big Bow. She said the best part of that job was the ice cream they had at harvest time.

Charles and Juanita lived in the housing at the Hugoton Production Plant south of Ulysses after Charles was discharged from the Navy. They then built a new home in Ulysses, later moving to Big Bow to live on their farm.

Charles passed away in 2009. Juanita stayed on the farm until July 2014, when she moved into Prairie Meadows Alzheimer’s Special Care Center in Omaha, Nebraska.

Juanita loved her cats and any other little fuzzy animals. She had a special talent for counted cross stitch pictures of which the family has many cherished pictures. She loved to work with her flowers, both inside and out.

Juanita is preceded in death by her parents; husband, Charles; and sisters, Betty Campbell and Joyce Rexroat.

Funeral service will be Friday, February 14, 2020, at 2:00 PM at the First Baptist Church in Ulysses, Kansas, with Reverend Jay Mykytiuk officiating. There will be no public calling hours. Interment will be at the Ulysses Cemetery in Ulysses, Kansas. Memorial contributions may be given to Alzheimer’s Association or St. Croix Hospice in care of Garnand Funeral Home, 405 W. Grant Ave., Ulysses, Kansas 67880.
Read Less

We encourage you to share your most beloved memories of Juanita here, so that the family and other loved ones can always see it. You can upload cherished photographs, or share your favorite stories, and can even comment on those shared by others.

Posted Feb 11, 2020 at 12:40pm
Richard and Shirley I am so sorry to hear of your Moms passing. I still remember when our parents Sunday school class made Christmas goodies at your home and we kids got to help pull the taffy. Your Mom was such a sweet and caring woman.
Comment Share
Share via: 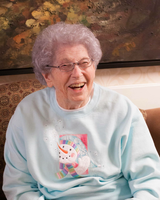