To share your memory on the wall of Verna Herman, sign in using one of the following options:

Provide comfort for the family of Verna Herman with a meaningful gesture of sympathy.

Verna worked at the Garden City Company and then for Southwestern Bell until she retired in 1984. She enjoyed doll collecting, sewing, genealogy, swimming and traveling to see her children, grandchildren and great-grandchildren. Verna was very social and enjoyed visiting daily with the numerous friends she made throughout her lifetime. She was known for her infectious smile, sense of humor and her kind and compassionate spirit.

Verna was preceded in death by her father, William, mother, Minnie, brother, Billy and her loving husband of 54 years, Rich.

Receive notifications about information and event scheduling for Verna

We encourage you to share your most beloved memories of Verna here, so that the family and other loved ones can always see it. You can upload cherished photographs, or share your favorite stories, and can even comment on those shared by others.

Posted Apr 25, 2020 at 11:05am
Our sympathies to Verna's family... I worked with Verna at SW Bell, and often ran into her in the local grocery store over the years after she retired. She was always so pleasant and enjoyed when I would say hello to her... God Bless!
Comment Share
Share via:
TH

Posted Mar 10, 2020 at 07:43am
Our sympathies and prayers to the family. We have fond memories of Rich and Verna. Now they are reunited. We had stopped by her house sometime back and had a very nice visit with her. Tom stopped by and visited also. She had a great life and loved to talk about her love of her family. We are not able to attend funeral today but will be praying for her and her family. Tony and Sarah Herman
Comment Share
Share via:
HS

Flowers were purchased for the family of Verna Herman.

Posted Mar 07, 2020 at 09:12pm
Reva Wilkerson
I worked with Verna at Bell Tele in the 60s and 70s. She was a friendly co-worker and a good friend. Many years later I visited with Verna and Rich in a restaurant while on the road traveling. We reminisced for a long time. They adored their children and visiting with them. I know God will wrap his loving arms around you as you say goodbye to such a lovely lady!
Comment Share
Share via:
J

Posted Mar 06, 2020 at 08:48am
My Sincere condolences to the family. This is so heartbreaking I know. As the days and weeks pass by and you return to life’s routine may the God of all comfort (2cor1:3) along with the love and support from family and friends continue to comfort you and help to carry your grief with hope.
Comment Share
Share via: 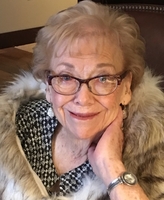