To share your memory on the wall of Marvin Pinkston, sign in using one of the following options:

Provide comfort for the family of Marvin Pinkston with a meaningful gesture of sympathy.

Marvin went to early school in Healy and graduated from Dighton High School in 1950. He served in the United States Marine Corp and after his discharge he returned to the family farm near Dighton and was a lifelong Farmer-Stockman. He was active in the Dighton community by serving on the soil conservation board, Dighton Housing Authority Board, Dighton Recreation Commission Board, County Director for Kansas Livestock Association and spent many years on the American Legion Post # 190 funeral honor guard. He was a huge sports fan and was a fixture on the chains for Dighton High School football, watched every Kansas City Royals game and every KU Basketball game. He attended the Big 8, later the Big 12 Basketball Tournament in Kansas City for many years. He loved to fish and hunt and for many years led pheasant hunts on his farm. He especially enjoyed checking on his cattle at the area feedyards.

Funeral Service will be at 10:30 AM Saturday at the United Methodist Church in Dighton with Rev Berniece Ludlum officiating. Burial will be in Dighton Memorial Cemetery with military honors by United States Marine Corp Honor Guard and American Legion Post # 190 Honor Guard. Memorials are suggested to United Methodist Church or American Legion Post # 190 Honor Guard in care of Boomhower Funeral Home. Friends may call from Noon to 8:00 PM Friday with family present from 6:30 to 7:30 PM at Boomhower Funeral Home in Dighton. Friends may post condolences at www.garnandfuneralhomes.com

Receive notifications about information and event scheduling for Marvin

We encourage you to share your most beloved memories of Marvin here, so that the family and other loved ones can always see it. You can upload cherished photographs, or share your favorite stories, and can even comment on those shared by others.

Posted Mar 11, 2020 at 04:50pm
Wanda, Sherrie, Gary, and Terie, I am so sorry to hear of the loss of Marvin. My early memories are wrapped up with Marvin and Wanda especially those weeks when I stayed with you while Mert was hospitalized. Bridge get-togethers, bridge club, and supper club were not only huge to Mert and Herb but also very fond memories for my sisters and I. A very clear early memory I have is of Marvin and Wanda stopping by our house to introduce us to Terie. You are all in my thoughts. Marvin will be missed. Love Danis Woodham Sprague
Comment Share
Share via:
HV

Posted Mar 10, 2020 at 11:10am
So sorry for your loss. He was a wonderful guy. Always a smile. Our thoughts and prayers are with you all. Jim and Harriet Vance
Comment Share
Share via:
DR

Posted Mar 09, 2020 at 09:52pm
I can't believe how much he looked like my Uncle Melvin Pinkston. They could have been brothers. So sorry to hear about his passing. Love to the family- Dawna Ruggles, a Pinkston cousin.
Comment Share
Share via: 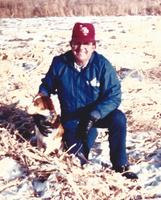