To share your memory on the wall of Barbara Jasper, sign in using one of the following options:

Provide comfort for the family of Barbara Jasper with a meaningful gesture of sympathy.

Barbara was a 1978 graduate of Dighton High School. She attended several colleges before moving back to Dighton in 1982 and started working at the First National Bank. She was at the bank for 38 years and currently was the Assistant Cashier. She was a member of St Theresa Catholic Church where she was a member of the Altar Society and Octoberfest Committee. She enjoyed reading, watching Dighton Hornet activities and attending concerts. She bowled bowled in the senior nationals twice, placing both years. She was preceded in death by her Father.

Memorial Services will be held at a later date. Burial will be in Dighton Memorial Cemetery. Memorials are suggested to St Theresa Catholic Church in care of Boomhower Funeral Home. Condolences may be posted at www.garnandfuneralhomes.com

Receive notifications about information and event scheduling for Barbara

We encourage you to share your most beloved memories of Barbara here, so that the family and other loved ones can always see it. You can upload cherished photographs, or share your favorite stories, and can even comment on those shared by others.

Posted Apr 29, 2020 at 11:52pm
Barbara always had a such a pleasant smile. At the bank she was friendly, professional and knowledgeable. She will be missed at her work and in the community.
Comment Share
Share via: 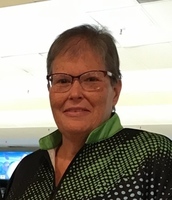