To share your memory on the wall of Cynthia Jarmer, sign in using one of the following options:

Provide comfort for the family of Cynthia Jarmer with a meaningful gesture of sympathy.

Cynthia has lived most of her life in Garden City. She attended Garden City schools and graduated from Garden City High School in 1974. She then attended and graduated in 1978 from Fort Hays State University earning a Bachelor’s degree in Business Education. Cynthia then taught for several years in Jewell, Kansas. She returned to Garden City where she first worked as an office manager at Jarmer’s Warehouse Showroom. Cynthia later worked at Sunflower Electric, Garden City Wholesale, & Garden City Community College before her retirement. She was a member of St. Dominic Catholic Church in Garden City where she served as a Lector and Eucharistic Minister. She was also a member of the Altar Society. Cynthia enjoyed her cats, traveling, attending music concerts and ball games. She also loved to spend time with her family especially her nieces and nephews.

Survivors include a brother Roger & wife Deb Jarmer of Garden City; eight nieces and nephews and fifteen great-nieces and great-nephews. She is preceded in death by her parents and two brothers Kurt Jarmer and Gary Jarmer.

Funeral services will be held at 10:30 a.m. on Monday, May 4, 2020 via Facebook Live on the Garnand Funeral Home Facebook page. Burial will take place at Sunset Memorial Gardens in Garden City. Friends may call from Noon to 8:00 p.m. on Saturday and from Noon to 8:00 p.m. on Sunday all at Garnand Funeral Home in Garden City. The family suggests memorials given to St. Dominic Catholic Church in care of the funeral home.
Read Less

Receive notifications about information and event scheduling for Cynthia

We encourage you to share your most beloved memories of Cynthia here, so that the family and other loved ones can always see it. You can upload cherished photographs, or share your favorite stories, and can even comment on those shared by others.

Posted May 04, 2020 at 10:42am
Cindy Jarmer was a very kind soul and a faithful servant of God! She ALWAYS had a smile and a kind word just like her mother Beth Jarmer always did. God Bless Her and May her Soul Rest in Eternal Peace! Stephen & Elaine Sexton
Comment Share
Share via:
A

Posted May 02, 2020 at 02:36pm
I am heartbroken to hear of Cindy's passing. She was a remarkable woman and I enjoyed knowing her.
Comment Share
Share via:
R

Posted May 01, 2020 at 11:50am
I am so saddened to hear of Cindys Passing. It was our BLESSING to have had the opportunity to know her and and have conversation. She knew everybody and remembered everybody she met . We will miss her and pray God will grant her PEACE!
Rena Schwieterman
Comment Share
Share via:
DB

Posted Apr 30, 2020 at 12:32pm
Cindy was a classmate of mine at GCHS. We had many classes together over the years....typing, shorthand, office education, etc., and had many, many laughs together. Cindy's laugh was infectious and her smile contagious. It seems nothing ever got her down. I'm so sorry to read of her passing, but I know that she believed in her Heavenly Father and that she is among the angels now. God bless her family as they mourn.
Comment Share
Share via: 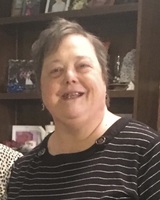