To share your memory on the wall of Nu Nguyen, sign in using one of the following options:

Provide comfort for the family of Nu Nguyen with a meaningful gesture of sympathy.

Nu grew up in Viet Nam and became head of the Police force in a Viet Nam province. After the war he was taken to a concentration camp as a high ranking government official. After 3 years the United States government sponsored him and the family was relocated to the United States in November of 1995. He lived in Garden City and worked in the Processing Department for Tyson.

Funeral Mass will be at 10:00 AM on Monday via Facebook Live on the Garnand Funeral Home Facebook Page. Burial will be in Valley View Cemetery in Garden City. Friends may call form 1:00 PM to 8:00 PM Sunday at Garnand Funeral Home. Condolences may be posted at www.garnandfuneralhomes.com

Receive notifications about information and event scheduling for Nu

We encourage you to share your most beloved memories of Nu here, so that the family and other loved ones can always see it. You can upload cherished photographs, or share your favorite stories, and can even comment on those shared by others. 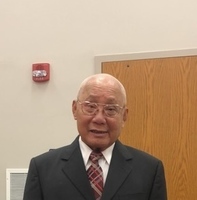