To share your memory on the wall of Forrest Schneider, sign in using one of the following options:

Provide comfort for the family of Forrest Schneider with a meaningful gesture of sympathy.

Forrest attended grade school and high school in Dighton and then went on to attend Fort Hays State University where he received his teaching license. He taught at a country school for a short time and even had one of his sisters as a student.

On May 27, 1945 he married Donna L. McCoy in Lane County, Kansas, just shy of 75 years ago. Forrest farmed in the Lane County area until 1953 when the two moved to Salida, Colorado. There he worked as a Deputy Water Commissioner for Chaffee County, raised lambs, and kept busy with carpentry work. Forrest and Donna returned to Dighton in 1980 where he continued his trade as a carpenter, often being called on by those in the community for jobs big or small. Forrest was always a very hard worker and stayed at it until the task was complete.

Forrest and Donna enjoyed traveling and spent many winters in warmer climates. Involved in several activities and memberships including the First Christian Church, Officer at the J.O.Y. Center, The Saddle Club, Dighton Broncos, High Plains Roamers, Snowmobile Club, and the Square Dance Club. He and Donna even ran dances at McCoy Hall, twice a month they would have an orchestra come and perform, as well as other teen and adult dances.
Survivors include his wife -Donna of the home,  sisters-in-law -Rita Roehl of Dighton and Dora Mae Bowman of Scott City, nieces - Pam Augustine of Ellis, Cheri Benjamin of Antigua, West Indies, Glenda Cheatum of Syracuse, Cindy Bailey of Scott City, Diane Cramer of Topeka, Anita Mumma of Louisiana, and nephew - Rad Roehl also of Dighton. He is preceded in death by his parents and two sisters- Vernetta Mumma Harper and Phyllis Bowman.

A Graveside Service will be held at 2:00pm Monday May 18, 2020 at the Dighton Memorial Cemetery with Alana Chapman officiating.  The service will also be available via Facebook Live. Memorial contributions are suggested to the First Christian Church or the J.O.Y. Center in care of Boomhower Funeral Home. Condolences may be posted at www.garnandfuneralhomes.com

Receive notifications about information and event scheduling for Forrest

We encourage you to share your most beloved memories of Forrest here, so that the family and other loved ones can always see it. You can upload cherished photographs, or share your favorite stories, and can even comment on those shared by others. 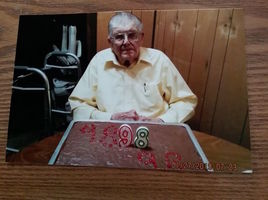 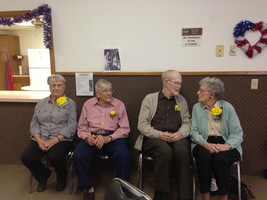