To share your memory on the wall of Micheal Brooks, sign in using one of the following options:

Micheal was a gifted fabricator, welder, electrician and mechanic and had a passion for rat rods, rye whiskey, hard rock music, and especially his dogs. He was a very devoted and loving husband to wife Melody (Jarboe) and caring father to Seth Szekula. Micheal & Melody were united in marriage on August 9, 2008 at Taylor Park, Co and the Colorado mountains became a very special place for him. Micheal never knew a stranger and was always willing to lend a hand.

Micheal leaves the love of his life Melody, and son Seth of the home, sister Starla (Brooks) Kernell (Dave) of Fowler, KS, and aunt Peggy (Williams) Stotler of Ashland, KS. Mother and Father-in Law, Jim and Barbara (Weatherred) Jarboe of Lakin, KS, and many nieces, nephews, cousins and many, many friends.

Micheal was proceeded in death by his parents, a sister, Melissa (Lynne) (Brooks) Young, and his grandparents.

A private viewing took place with family on May 21, 2020 and a celebration of Micheal’s life will be announced at a later date.

Memorials are suggested to the Micheal Brooks Memorial Fund, in care of Garnand Funeral Home in Garden City.
Read Less

Receive notifications about information and event scheduling for Micheal

We encourage you to share your most beloved memories of Micheal here, so that the family and other loved ones can always see it. You can upload cherished photographs, or share your favorite stories, and can even comment on those shared by others. 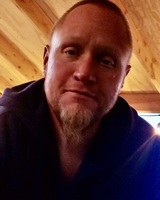