To share your memory on the wall of Rita Zerr, sign in using one of the following options:

Born and raised on the family farm near Hanston Kansas, Rita grew up with a legacy of love, kindness and self-worth to pass on to future generations. She ... Read More
Rita (Burkhart) Zerr, age 86, passed away June 14, 2020 in Garden City, Kansas.

Born and raised on the family farm near Hanston Kansas, Rita grew up with a legacy of love, kindness and self-worth to pass on to future generations. She graduated from Sacred Heart College and moved to Garden City in 1953 where she taught 2nd grade at St. Mary’s School until she married Martin Zerr in 1954. During their 40 year marriage, they raised eight children.

A busy Wife, Mother and Volunteer, Rita played the organ and lead choirs at St. Mary and St. Dominic parishes for over 30 years. Rita and her husband Martin owned Zerr Construction and Zerr Canvas Shop. She then went on to become a Jafra cosmetics manager and worked for the Garden City Chamber, H&R Block and Tatro Plumbing, and ended her working career by delivering meals to seniors with Meals on Wheels.

She is preceded in death by her daughter Martha Naab, her parents, Pete and Mary, and 6 of her 7 siblings.

We will celebrate Rita’s life together Thursday, June 18th at St. Mary’s Parish. Rosary at 10:00 a.m. followed by the funeral Mass at 10:30 a.m. open to everyone, followed by a private family interment at Valley View Cemetery.

Memorial donations to The Daughters of Isabella, Chapter #781, and condolence cards for the family can be sent care of Garnand Funeral Home.
Read Less

Receive notifications about information and event scheduling for Rita

We encourage you to share your most beloved memories of Rita here, so that the family and other loved ones can always see it. You can upload cherished photographs, or share your favorite stories, and can even comment on those shared by others.

Posted Jun 18, 2020 at 09:29am
Mrs. Zerr was so friendly and I always enjoyed visiting with her. Thinking of the Zerr family.
Comment Share
Share via:
MY

Posted Jun 17, 2020 at 12:01pm
Aunt Rita was a sweetheart and will be missed by so many. She was always willing to open her home to all the huge family of sisters, brothers, nieces and nephews and we had some good times at her house.
My deepest sympathies to all the family
Comment Share
Share via:
DZ

Posted Jun 16, 2020 at 06:57pm
My deepest sympathies to all of you, I had the privilege of attending the marriage of your Mom and Dad and remember it well.
Comment Share
Share via:
BH

Posted Jun 16, 2020 at 05:13pm
my memory is one of a beautiful blond teacher, in those days all of the teachers at St. Marys were nuns. Your mother was vivacious, easy to talk with and very good at her job. By the time I was in 4th grade she was getting married to your dad. I just remember it seemed like a fairy tale.
She mad a very good impression on me and I cherish the memories I have of her.
May she rest in peace. I just wanted you all to know how a teacher like her touches a life.
Comment Share
Share via:

Thanks for sharing this memory. As her children we didn't get to know her as a teacher in the classroom setting, however she was our greatest teacher throughout our lives! 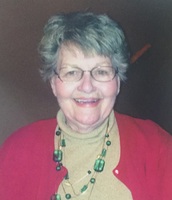