To share your memory on the wall of Carl Hall, sign in using one of the following options:

He was born September 5, 1930, in Elkhart, Kansas, the son of James A. and Madge R. (Holcomb) Hall. He lived in the Elkhart area his entire life. He was the fourth child of twelve siblings.

Carl served his country when he was drafted into the United States Army on April 18, 1951. He was a Corporal with the 15th Constabulary Squadron. After an honorable discharge, he returned home to continue farming in April of 1953.

He started farming with $2,000.00 in debt and an old “D” John Deere tractor. To support his family, Carl had a long career involving different jobs such as; custom cutting, swathing and baling, rough necking in the oil fields, building farm machinery, and growing crops. For many years, he worked all day in the fields farming and then at night he worked in the oil fields.

On November 7, 1955, Carl married Margaret A. Hall, and they raised three sons and three daughters.

Carl had an interest in flying, and purchased an Aero-Coupe airplane and enjoyed flying over his crops. He also enjoyed spending time attending and competing at antique tractor pulls. There were times when he would be competing against his sons, Sam and Tom.

He loved children and often would find his grandchildren sitting on his lap. He provided old fashion homemade toys to entertain his grandkids. One summer he made hoola-hoops, stilts, and birdhouses. He always had old jeeps, scooters, and 4-wheelers for the kids to drive around the farm. One summer he gathered turtles for a turtle race for the fair. He made a tire swing and hung it up for the girls. He loved for his grandchildren to visit the farm during the summer months. Carl often reminisced and remarked “those were the best days of my life”.

Receive notifications about information and event scheduling for Carl

We encourage you to share your most beloved memories of Carl here, so that the family and other loved ones can always see it. You can upload cherished photographs, or share your favorite stories, and can even comment on those shared by others. 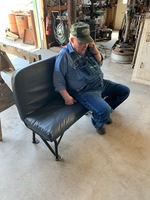