To share your memory on the wall of Richard (Dick) Haefele, sign in using one of the following options:

Dick grew up in Topeka on a dairy farm as one of 10 siblings where he learned independenc... Read More
Richard Ralph (Dick) Haefele was born on October 6, 1926 in Topeka, KS. He died peacefully in his sleep on July 21, 2020 in Ulysses, KS at age 93.

Dick grew up in Topeka on a dairy farm as one of 10 siblings where he learned independence and the value of hard work. He went to Catholic school where he learned how to express his individuality, question authority, and when it might be worth the punishment to do so. He left school at age 17 to serve his country in the Navy during WWII as a ship’s signalman stationed in the Philippines. When he returned from service, he obtained a GED and studied English and history at Washburn University under the GI Bill. While at Washburn, he was swept away by a young co-ed, Beverly Baughman. They eloped to Butler, MO to get married on January 29, 1949, but didn’t tell their parents until days after when Dick came to pick Beverly up for a date. At first her parents wouldn’t let her go, but eventually agreed when they learned they had married. The couple would be together for 71 years until Dick’s death.

The young couple moved to Ulysses, KS in 1952 where Dick taught at Grant County Rural High School. He encouraged his students to think independently and question what they were taught more than he was allowed in his younger days. He also started Haefele Construction, and eventually left teaching to pursue carpentry full-time. He built a number of houses in Ulysses and was well-respected for his remodeling and cabinetry craftsmanship on small and large projects including the lower level of the Grant County Bank. In his later working years, he returned to the school district maintaining the buildings and grounds and occasionally substitute teaching. He liked to recall teaching 2nd graders how to come up with their own philosophy of life. Dick’s example to them was “Always do your best and don’t hurt others.”

Dick and Bev raised four children in Ulysses. Claudia (Eureka, CA), Mark (Houston, TX who preceded him in death), Marty (Lawrence, KS), and Kyle (Lincoln, NE). One of the rare times when all four of them were together as adults, they were discussing who they thought was “Dad’s favorite” child. Each one revealed that they had always considered themselves as his favorite -- a sure sign of a good parent.

Dick was a proud, civic-minded citizen of Ulysses. He was instrumental in starting the Ulysses Golf Course and the high school golf program, where he served as it’s first coach. You can still count his holes-in-one on the plaque in the Bentwood pro shop. He was a member of the Masonic Lodge serving as Grand Lecturer across the State of Kansas. He was active in Rotary, and led the local Red Cross blood drives for many years until age 90.

There will be no service. Cards may be sent to Beverly Haefele at the Western Prairie Assisted Living 705 N. Missouri, Ulysses, KS 67880. Remembrances may be left on the Garnand Funeral Home website (garnandfuneralhomes.com). Memorials may be sent to the American Red Cross of Central/Western Kansas 120 W. Prescott, Salina KS, 67401; or the Rotary Club of Ulysses PO Box 232, Ulysses, KS 67880.
Read Less

Receive notifications about information and event scheduling for Richard (Dick)

We encourage you to share your most beloved memories of Richard (Dick) here, so that the family and other loved ones can always see it. You can upload cherished photographs, or share your favorite stories, and can even comment on those shared by others.

Posted Aug 03, 2020 at 04:39pm
I shared a picture of our trip to the Worlds Fair. It didn't scan well as it is a Polaroid. My mom and dad and my cousin Diana and I rode in one van, and Dick, Bev, Marty, and Kyle in the other. This was a great trip and I have good memories. Dick and Bev were among my parents (Darrell and Dorothy Pinegar) best friends. Dick helped build our house in Lyons, Kansas and I know my dad was very grateful. Dick was a great guy and he will be missed. I like to picture Dick and Dad playing golf together again.
Comment Share
Share via:
KH

Posted Jul 23, 2020 at 09:04pm
I was a student under him then later I babysit in their home when Marty was a baby a very good time in my life with many present memories. Many prayers to Beverly and the children always in my fond memories.Emma(Talbert) (Yohn) German
Comment Share
Share via:
M

Posted Jul 23, 2020 at 03:18am
Dick was a wonderful friend to my family, traveling to visit my folks, Holly and Thelma Brown after they moved from Ulysses to be closer to us in Olathe.

I have such wonderful memories of time spent with him. He hired me and my brother Bob, to work with him during the summers after I graduated. He taught me so much about the hard, caring work of building and we did it all, from pouring the foundation to shingling the roof and everything in between. Dick probably had as much to do with my later success as an architect as anyone in my life.
He also gave me a way to look at life with an event I'll never forget. I have told the story more than any other story in my life. I was sitting at his kitchen table with Dick and his wife, Bev when there was a knock at the door.
Standing at the door were two young men in white shirts, dark ties and pants. Before either of them could say anything, Dick said "thanks, boys, for dropping by but I believe in letting everyone go to he** in their own way" and shut the door.

That was Dick Haefele to me..... A wonderful, direct man who was a big part of my life. My regret today is that I never told him how special he was to me All my love to his Bev and their kids. I'm very sure he's happy to be with his son, my old friend, Mark.
What a wonderful life well spent
Merle Brown
Comment Share
Share via:
SK

Posted Jul 22, 2020 at 03:46pm
Dick was a good friend. Among other things, he helped me improve my golf game, showed me how to install edge banding on woodworking projects and increased my knowledge in Masonry. Condolences to Bev, Marty, Kyle, and the rest of the family. Sending up prayers for comfort and healing to all. Rest in peace, Brother!
Comment Share
Share via:
KL

Posted Jul 22, 2020 at 12:09am
I have so many fond childhood memories of Dick & Bev. Dick was a wonderful man who showed infinite patience to an inquisitive child. He taught me all about worry rocks, chickens, and golf. He told amusing stories and jokes. He loved to tease me and make me think. I loved our visits out to the house. My sincerest condolences to Bev and the family.
Comment Share
Share via:
SK

Dick also thought you needed to know how to 'spit', so he took you outside and taught you. We had mixed emotions about that one, but it was so Richard.

Ha, Steve, that is the exact story I was thinking of when I saw Keri wrote in. Thanks so much for sending your memories. 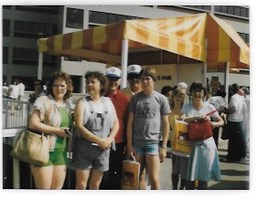